Lessons from a Master of Innovation 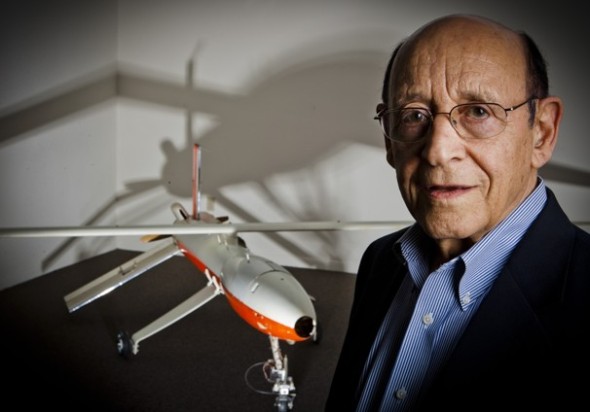 There are so many lessons to learn from Abe Karem (http://karemaircraft.com/), an Israeli-born American aerospace engineer, that it is hard to know where to start and stop. In the profile below we see examples of several important habits, traits, and mindsets:

The use of drones for military purposes is much in the news including their legality and issues of transparency and accountability. The application of engineering ingenuity for military purposes goes back millenia — after all Leonardo devised all manner devices for siege and killing, the Nobel Prize was funded by a firm that made explosives that its founder hoped would be used for peaceful purposes, and only a few years after the Wright brothers took off from Kitty Hawk, armies were using airplanes for military applications.

When [Abe] Karem arrived in America from Israel in 1977, the Pentagon had almost given up on robotic planes. At the time its most promising UAV, the Aquila, needed 30 people to launch it, flew for just minutes at a time and crashed on average every 20 flight hours. “It was insanity itself,” says Mr Karem. “It was obvious to me they were going to crash because they had 30 people doing something that could be done better by three.”

Mr Karem founded a company, Leading Systems, in the garage of his Los Angeles home and began work on a drone that would ultimately transform the way America wages war. It was built in an intentionally low-tech manner, using plywood, home-made fibreglass and a two-stroke engine of the kind normally found in go-karts. “I wanted to prove that performance is largely a result of inspired design and highly optimised and integrated subsystems, not the application of the most advanced technology,” he says.

Critically the drone, code-named Albatross, was developed by a handful of engineers, and operated by a team of just three. “Doing things with the absolute smallest team increases the chance that you’re not going to screw up,” says Mr Karem. “Nothing replaces highly talented people—white-hot passionate thinkers in love with doing challenging things.” After a flight test during which Albatross remained aloft for 56 hours, DARPA, the research arm of America’s armed forces, funded Mr Karem to scale it up into a more capable drone called Amber. It, in turn, evolved into the modern Predator.

It was almost inevitable that Mr Karem would become an aerospace engineer. He built model aircraft at school, inspired by a teacher who had flown in a British Lancaster bomber during the second world war. Mr Karem went on to study aeronautics at Technion, Israel’s prestigious Institute of Technology, and then joined the Israeli Air Force. Within 13 years of graduating, Mr Karem had completed and deployed 16 projects, mostly conversions of jet fighters to add new weapons or capabilities. “In Israel at that time, we averaged six months from an idea to completion of flight testing,” he says. “Military programmes in the United States now typically take over 20 years to achieve first operation.”

Mr Karem also built his first drone. During the Yom Kippur war of 1973, Israeli fighter-bombers attacking Egypt and Syria were being stopped by Russian-made air defences. Israel needed a fast decoy drone to activate the defensive radar systems, so they could then be hit using anti-radiation missiles. Mr Karem’s team designed, built and flew such a drone in just one month.

Amber, the drone he built for DARPA, was intended for a very different role. In the event of a war between NATO and the Warsaw Pact countries, Amber drones would be used to carry out surveillance and electronic warfare over the battlefields of Europe. A special ultra-high altitude version of Amber was even planned to restore temporary communications over America after a nuclear war.

Despite its ambitious aims, Amber, like Albatross, was largely home-made by Mr Karem’s small team. It was powered by a four-stroke petrol engine developed secretly in the garage of Hans Hermann, a Formula 1 racing legend of the 1950s. Its cutting-edge electronics and remote-control ground station were assembled in the living room of another employee. “When I started, people asked why I was making a UAV with four times the computational power of the F-16, the first fly-by-wire jet fighter,” says Mr Karem. The reason was that, as any computer buyer knows, a more powerful machine takes longer to become obsolete. “Almost all of our subsystems from 1985-89 are still flying in some Predators today,” says Mr Karem, “including its 27-year-old computer and, with minor changes, the ground station.”

By 1986 Amber drones were flying for more than a day without landing, reaching altitudes of nearly 30,000 feet and operating safely even in bad weather. And unlike Aquila, the Amber rarely crashed, suffering just one accident in 650 hours of tests. To ensure his engineers focused on flight safety, Mr Karem refused to allow parachute-recovery systems in any of his UAVs. “Crashing when you can’t afford to is the best way to learn,” he says.

Amber’s accelerated design process, lean staffing and high reliability also meant that the entire cost of each experimental drone, $350,000, was less than the cost of running an Aquila UAV for a single hour. Understandably, both the US Army and Navy were interested in funding Amber to production, with the aim of buying as many as 200 aircraft a year.

Shortly afterwards, financial pressure forced Mr Karem to sell Leading Systems to Hughes Aircraft, who in turn sold it to another defence contractor, General Atomics. Resigned to the fact that America did not want Amber, Mr Karem made a cut-down, runway-launched version of it for export, called the Gnat 750. General Atomics had just sold six Gnat 750s to Turkey in 1993 when escalating conflict in the former Yugoslavia meant that America suddenly needed a high-endurance drone for covert reconnaissance. The director of the CIA at that time was Jim Woolsey. “He asked his UAV programme officer to do the job, and they said it would cost $100m and take five years,” says Mr Karem. “He asked us, and we said it would be $5m and take three months. The rest is history.”

As promised, the Gnat 750 was flying over Bosnia within months, relaying live video feeds to the Pentagon via a manned aircraft and a satellite ground station. By July 1994 General Atomics had incorporated satellite links into the Gnat itself, giving the drone a gently rounded nose that belied its pugnacious new name: Predator. America now had a platform that could loiter over a target area for days, provide infra-red and optical surveillance in all weathers—and, with the addition of Hellfire anti-tank missiles in 2001, launch a devastating attack without warning.

Today the Department of Defence has over 6,000 UAVs, including hundreds based on the Predator. Predators have been used by America in every conflict since the Balkans, including Afghanistan, Iraq, Yemen, Somalia and Libya, and have collectively logged millions of flight hours. America’s armed forces plan to spend $37 billion on UAVs in the next decade, increasing their number to more than 8,000.

Mr Karem makes no effort to hide his low opinion of the world’s largest aircraft manufacturers, and implies that the problem is managerial, not technological. “Incumbents have a problem creating anything that would compete with what they’re already doing,” he says. “You need inventors who are dreaming and tinkering to make new things happen.”

Now that drones are being built by hobbyists and spreading into non-military use, Mr Karem has moved on again. His latest aerospace start-up, Karem Aircraft, aims to bring the A160’s variable-speed rotor technology to fixed-wing passenger planes. AeroTrain is an aircraft capable of vertical take-off and landing. It is intended to compete with the Boeing 737 and Airbus A320, the workhorse narrow-bodied aircraft that dominate commercial aviation. Its twin turboprop rotors lift it off the ground like a helicopter before tilting forward for fuel-efficient horizontal flight. Its ability to operate from tiny airports makes the AeroTrain a cost-effective alternative to existing aircraft, Mr Karem insists, particularly for developing nations that lack road and rail infrastructure.

“Boeing and Airbus would not want to see AeroTrain happen,” he says. “But smaller guys like Embraer and Bombardier may be motivated to do something that is not only very different, but has patents that could keep the incumbents out for 30 years.” With his drones, Mr Karem has already revolutionised aviation once. As unlikely as AeroTrain sounds today, it would be foolish to discount the possibility that this ever-dreaming, ever-tinkering engineer might do so again. (The Economist)