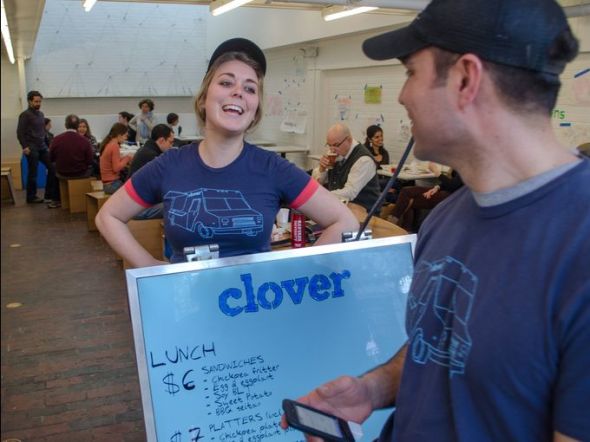 This story mixes two cups cup tasty food, one nob of entrepreneurialism, two tablespoons of technology, and two cups of lean thinking. Clover Food Lab (http://www.cloverfoodlab.com/) is a restaurant with two locations (Harvard Square and Cambridge) and seven food trucks. They serve good, tasty food that is also vegetarian; but don’t hold that against them meat-lovers.

More salient for this blog is their focus on applying lean process principles to their operation. At a strategic level, a lean restaurant does not use ingredients sitting for weeks on shelves, but rather works on a pull basis with fresh ingredients. Freezers are unlean, packaged shelf-stable food is unlean. In an article by Oliver St. John, he describes Clover and Ayr Muir the founder:

Clover Food Lab is so efficient, it claims to be able to serve six to 10 customers a minute and make a meal in three-and-a-half minutes flat.

Why should McDonald’s have all the fun? Clover’s food is locally sourced, organic, vegetarian healthy stuff made from scratch. Walk in the door, and next thing you know, you’re holding a pita stuffed with egg and eggplant or a barbecue sandwich made with seitan, a meat substitute.

When a crowd comes in, employees rush to meet them, taking orders on iPhones, scanning credit cards with mobile scanner Square, and giving change from money belts. When the crowd dies down, they rush to the kitchen and start chopping (Note the lean principle of cross training and the reduction of wasted motion by using money belts rather than walking to get change.)

The restaurant looks more like one of the nearby MIT science labs than a typical eatery. Gleaming equipment is on display around the large kitchen behind the counter. Fresh ingredients sit behind glass refrigerator doors. The decoration is minimal, the walls, white, and the lighting, fluorescent.

The menu, which changes daily to accommodate the fluctuating availability of local and organic ingredients, is displayed on what looks like a white board. Actually, it’s a flat-screen monitor with everything typed out in a font that founder Ayr Muir designed to look like his handwriting.

“People have all sorts of negative associations with fast food, but there are lots of good things about fast food, too. There’s a reason we eat so much of it as a country,” says Muir. 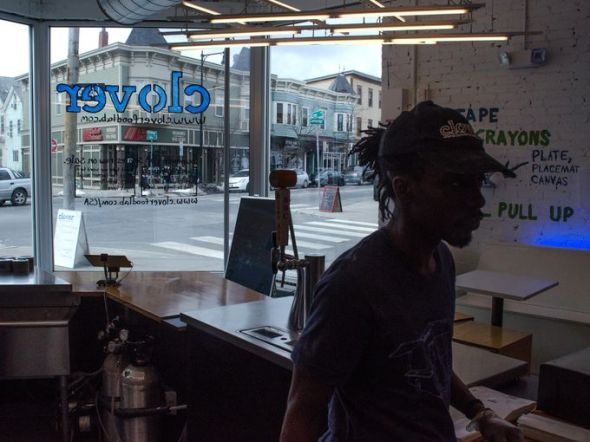 Clover’s owners say that because they serve so many customers a day, they can use expensive ingredients but not charge very much because their volume is so high. Their menu, which changes every day, is on a big flatscreen TV, and whenever they run out of any items, those items are automatically deleted from the menu.

Employees do just about everything on iPhones, from taking orders to e-mailing receipts and nutrition information, using form-building app Wufoo. (Note the use of Wufoo http://www.wufoo.com/ to eliminate paper and digitize content.) When customers come in, they’re greeted by an employee with an iPhone. The order goes into Wufoo, and gets sent to the kitchen. Wufoo tells the cooks what’s been ordered, and how long the customer’s been waiting. Clover also keeps track of its ingredient inventory on Wufoo, and syncs it with the menu. Once an item runs out, it’s automatically taken off the ordering interface and struck  from the screen displaying the menu to customers.

While the efficiency of Clover’s point-of-sale system is built on technology, the food-making speed strategy is less high-tech.

“There’s nothing revolutionary or very advanced. Everything is just very simple,” says Rolando Robledo, Clover’s head chef. If veggies can be washed instead of peeled, they’re getting washed. If something doesn’t have to be strained, it’s not going to be strained. Any ingredient more complicated than a sliced tomato is prepared earlier in the day. (Note the reduction in wasted motion and tasks at the operator level.)

He says he knew no non-vegetarian would buy an all-vegetarian meal unless it tasted fantastic, so he’d have to use the best-tasting veggies around, mostly from organic and local farms. To make affordable meals with the expensive veggies, though, he’d have to focus on super-high volume, which was what got him thinking about efficiency.

Each employee gets trained in a knife skills class with a timed chopping competition, which keeps the food fast … and vegetarian.

“We call it ‘The V Word’,” says communications chief Lucia Jazayeri. Who wants to eat something with “vegetarian” written all over it? Vegetarians, and only vegetarians, she says. The target audience is non-vegetarian.

“We’re not trying to turn people into vegetarians,” says Muir. “You take the meat out if it, but you still want it to be something you love and dream about.”

Muir says 90% of his customers are non-vegetarian.  Many still ask if something’s got meat in it after being regulars for months.