Descartes, Locke, and Kant: Consultants (or, Pull Your Head Out of Your Phone) 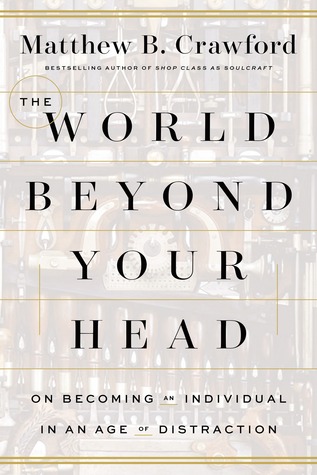 Questioning assumptions is part of the core ideology of process improvement. Interestingly, one thing that often escapes scrutiny is our assumptions about some pretty important ideas such as individualism and freedom of thought. True, pondering these concepts is not necessary in the here-and-now to fixing a broken process, but sometimes it is useful, I would argue, to engage in a conscious reflection on how we think and how we act and judge as a kind of exercise in keeping our critical faculties sharp.

Matthew Crawford’s “The World Beyond Your Head” is, seemingly, a critique of modern gadgetry and its powerful ability to distract and occupy our thoughts and energies with both the trivial and the terribly-urgent-but-not-important stuff that seems to crowd out other matters like kudzu. It is also a reflection on the nature of freedom, individualism, and the various ideologies at work in our assumptions about what it means to be human. In an interview with The National Review’s Ian Tuttle (http://www.nationalreview.com/article/416469/world-beyond-your-head-nr-interview) Crawford explains:

My critique of the anthropology we have inherited from early modern thought has a couple of dimensions. The first is sociological, simply noticing how autonomy-talk is pretty much the only idiom that is available to us for articulating our self-understanding, and how inadequate it is for capturing lived experience. It is the idiom of commencement speeches, of daytime talk shows, and also of marketing: You’re In Charge, as the message on the handrail of the escalator at O’Hare puts it.

Living in a culture saturated with vulgar freedomism, you may develop a jaundiced view of the whole project of liberation inaugurated by Descartes and Locke. If you then revisit those thinkers, I think your irritation prepares you to see things you would otherwise miss. You are bringing a prejudice with you, but sometimes a prejudice sharpens your vision. Sensitivity to the present, and giving credit to your own human reactions to it, can bring a new urgency to the history of philosophy.

What stands out for me, and for other writers I have learned from, is that the assertions those enlighteners make about how the mind works, and about the nature of the human being, are intimately tied to their political project to liberate us from the authority of kings and priests. In other words, it is epistemology with an axe to grind, polemical at its very root.

Yet this original argumentative setting has been forgotten. This is important, because Enlightenment anthropology continues to inform wide swaths of the human sciences, including cognitive science, despite that discipline’s ritualized, superficial ridicule of Descartes. We need to be more self-aware about the polemical origins of the human sciences, because those old battles bear little resemblance to the ones we need to fight.

In particular, it is very difficult to make sense of the experience of attending to something in the world when everything located beyond the boundary of your skull is regarded as a potential source of unfreedom. This is, precisely, the premise behind Kant’s ideal of autonomy: The will must not be “conditioned” by anything external to it. Today we get our Kant from children’s television, and from the corporate messaging of Silicon Valley. Certain features of our contemporary landscape make more sense when you find their antecedents in serious thought, because the tacit assumptions that underlie them were originally explicit assertions.

Crawford, as I see it, critiques the prevailing ideology that  an individual’s choices and predilections are sacrosanct (as long as they don’t appear to have any collateral damage to others that is socially unacceptable, such as the way second-hand smoke is now taboo) and that most everything is subjective and relative. He illustrates this searching for self-gratification in his references to various online gambling sites and smartphone-based distractions that are almost narcotic in their effectiveness:

Once you start digging into the chilling details of machine gambling, and of other industries such as mobile gaming apps that emulate the business model of “addiction by design” through behaviorist conditioning, you may indeed start to feel a little paternalistic — if we can grant that it is the role of a pater to make scoundrels feel unwelcome in the town.

According to the prevailing notion, freedom manifests as “preference-satisfying behavior.” About the preferences themselves we are to maintain a principled silence, out of deference to the autonomy of the individual. They are said to express the authentic core of the self, and are for that reason unavailable for rational scrutiny. But this logic would seem to break down when our preferences are the object of massive social engineering, conducted not by government “nudgers” but by those who want to monetize our attention.

My point in that passage is that liberal/libertarian agnosticism about the human good disarms the critical faculties we need even just to see certain developments in the culture and economy. Any substantive notion of what a good life requires will be contestable. But such a contest is ruled out if we dogmatically insist that even to raise questions about the good life is to identify oneself as a would-be theocrat. To Capital, our democratic squeamishness – our egalitarian pride in being “nonjudgmental” — smells like opportunity. Commercial forces step into the void of cultural authority, where liberals and libertarians fear to tread. And so we get a massive expansion of an activity — machine gambling — that leaves people compromised and degraded, as well as broke. And by the way, Vegas is no longer controlled by the mob. It’s gone corporate.

And this gets back to what I was saying earlier, about how our thinking is captured by obsolete polemics from hundreds of years ago. Subjectivism — the idea that what makes something good is how I feel about it — was pushed most aggressively by Thomas Hobbes, as a remedy for civil and religious war: Everyone should chill the hell out. Live and let live. It made sense at the time. This required discrediting all those who claim to know what is best. But Hobbes went further, denying the very possibility of having a better or worse understanding of such things as virtue and vice. In our time, this same posture of value skepticism lays the public square bare to a culture industry that is not at all shy about sculpting souls – through manufactured experiences, engineered to appeal to our most reliable impulses. That’s how one can achieve economies of scale. The result is a massification of the individual.