← Ingenuity: DIY Glaciers
Yes, But Can a Computer Enjoy a Martini? →

Analysis is of much less use (and can even make things more confusing) when data is not presented in a way that aids the reader in understanding the “so-what” and drawing accurate and insightful observations and conclusions (as opposed to obscuring the insights and even leading readers to the wrong conclusions). Consequently this author is a supporter of those authors, editors, and designers who create graphics that tell an accurate story even if the data and underlying analysis itself is complex.

A story from The Economist about the relationship between China’s housing market and the dynamics of marriage in a society where, depending on location, the number of men greatly outweighs the number of women, also features a simple, clean and revealing scatter plot:

In China mortgages often precede marriages. According to popular belief, if a man and his family cannot buy property he will struggle to find a bride. In choosing a husband, three-quarters of women consider his ability to provide a home, according to a recent survey of young people in China’s coastal cities by Horizon China, a Beijing-based market-research firm. Even if a woman herself dismisses this criterion, her family and friends, not to mention the country’s estate agents, will not let her forget it.

“Naked marriages”, as property-less ones are known, are endorsed by increasing numbers of young people. But as they get older, their attitudes may regress faster than society’s progress. One 28-year-old Beijing woman married her husband after falling in love with him at college. But “if you introduced a man to me now, and he couldn’t afford a home, I wouldn’t marry him,” she says. “I need to be more realistic. I’m not a 20-year-old girl.”

Some economists argue that competition for brides in China’s marriage “market” helps explain the punishingly high prices in its property market. Houses are least affordable in those parts of China where men most outnumber women, argue Shang-jin Wei of Columbia University, Xiaobo Zhang of the International Food Policy Research Institute and Yin Liu of Tsinghua University (see chart). 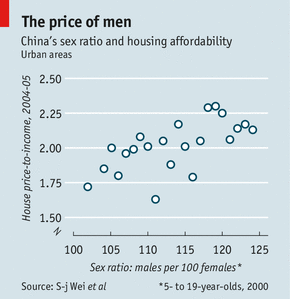 Men (and their families) splash out on property to improve their position in the marriage queue. But that merely forces other men to spend more in response. Unmarried men are locked in a Darwinian race, the economists argue. Overpriced homes are like the extravagant plumage of a peacock, an eye-catching encumbrance that only the most resourceful males can put on display.