← The Spanx Billionaire
How Good are You at Selling? → 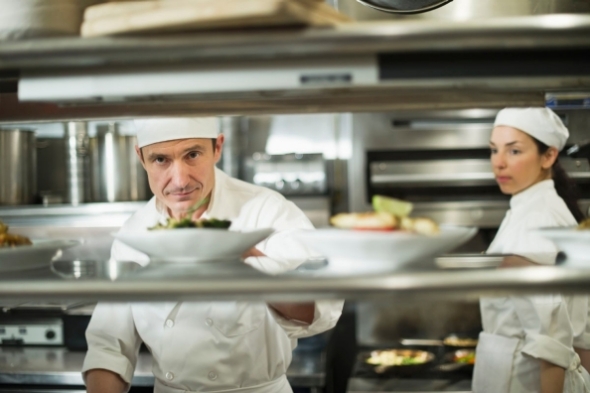 I enjoy cooking for myself and friends and also appreciate skilled cooking, whether simple, rustic meals or complex creations by master chefs. I often have lunch at a nearby diner (The George Street Diner) and besides the great folks that work there, I like how they prepare basic food — an Irish breakfast, a hamburger, an apple pie, mac and cheese — with care and from scratch. As one of the line cooks, Derek, said to me, he likes working there because he can see the customers, talk to them, and we can see them cooking; there is a connection and contact. Another favorite place of mine, Ici Bistro run by Chef J.P. Challet, is another place where the chef and his small staff are completely visible to the patrons and they can see each table and the reactions to what they have cooked.

On the other end of the spectrum is a chain like Applebee’s. I’ve had a few meals there, usually when on the road for work and just needed something to eat. Applebee’s and similar restaurants are not particularly cheap; it is quite surprising how quickly the bill can add up. Yet in terms of quality, value and connection it does not, for me, stack up to my neighborhood diner. This excerpt from a book The American Way Of Eating: Undercover at Walmart, Applebee’s, Farm Fields and the Dinner Table by Tracie McMillan, does a nice job of describing the nature of cooking in a mid-priced sit-down restaurant. It also gives a good sense of how much work is required to run that kind of kitchen; it is not easy. I often wonder how many of the kitchen staff care about cooking but have found this kind of job the best option to pay the bills and how many of them see the job as nothing more than an assembly line.

‘Expediting,” I am told at orientation, is the hardest job in Applebee’s.

The primary responsibility of an “expo” is to co-ordinate the flow of food from line to floor. To paraphrase Bernardo, the frenetic bear of a general manager who runs my orientation session in New York, everything I do keeps the restaurant moving. If I don’t do my job right then the orders won’t look right, and people won’t come back, and servers’ tips will be lower, and the restaurant won’t make as much money, and then they can’t afford to pay an expediter, which will mean the servers will have to expo their food themselves, which is never a good idea since it tends to result in the orders not looking right – and the downward spiral into chaos and bankruptcy begins all over again. I am the first domino in line; if I fall, we all go down.

When I come back the next morning, at 10: 00, I don’t start off in the kitchen. Instead, the kitchen manager, Freddie hands me a cup of coffee and a flip book full of presentation diagrams for every item on the menu and tells me to start memorizing: Do hot wings get a ramekin (a small bowl) of ranch dressing or blue cheese? Do they get a big ramekin or a small one? Which sandwiches get a side of coleslaw? Which dishes get sent out with wet naps? Which plates get lemons or limes? Tartar sauce? Cocktail sauce? Honey mustard? Sour cream? Mexiranch?

There are 151 different dishes on the menu and nearly half require some degree of dressing by the expediter. I spend several hours hunched over a table in the back of the dining room, my hair pulled up under an Applebee’s cap, scribbling notes to help myself memorize. And then, around noon, as lunch begins, Freddie puts me on the line.

The kitchen is big, a span of ruddy tile, white walls and stainless steel wrapped around its heart: the line. I’d guess that the kitchen is just under half of the dining room’s size, a third of it dedicated to the line. The rest, explains Freddie, is for storage and prep, where everything gets portioned out: bags of French onion soup defrosted, sacks of Monterey cheese divvied up for the line, bags of Alfredo sauce mixed with pre-shredded cheese, packs of Cargill ground beef defrosted and formed into patties.

Little of what he explains to me sounds like cooking, but the line is all business nonetheless. Three cooks whirl in the slice of space between sizzling cook tops and a long width of steel shelving, open on both sides and divided into three sections: the window. We stand on the other side, facing the cooks. A short, well-muscled man stands at the border, glancing up at a computer screen affixed to the top shelf, a tiny printer bolted underneath it. Fluorescent lights burn bright overhead.

Tony, this is Tracie, says Freddie. You’re going to train her on expo, all right?

He steps up, closer to the counter, and explains the line. The cooks put the food in the window, we dress it. Food moves down the pass from left to right, so ramekins are on the left of the pass, and then there’s the expo line, a series of small refrigerated bins built into the pass, with all the sauces and garnishes tucked in place.

When food comes up you put the correct ramekin of sauce or slaw or whatever it is that goes with it, and send it out. Any questions?

What do you want me to do? Before he can answer, the printer chortles and spits out a piece of paper. Tony tears it off, looks up at the computer screen and presses a button, making the screen rearrange.

Oh, I bumped the ticket. What do you mean?

Tony gives me a look equal parts teacher and irritated boss. It’s not on the screen anymore, he says, already pulling plates out of the window and calling for sauces. I scoop them out and hand them to him. A server walks past, sees the plate and barely pauses as he grabs them. The plates go out.

I soon realize that the computer is the nervous system of the restaurant, the circuitry that receives information, routes it through the brain, and enables the body to do something with it all. The cooks here never see paper tickets; instead, each station has its own computer screen. An order comes in and each dish crops up on the respective cook’s screen – they don’t know what else was ordered at the table. Simultaneously, the complete order, every dish and every last substitution of mashed potatoes for fries, eighty-six that onion on the Firepit burger and all the rest, is listed on mine. Appetizers are supposed to be ready in seven minutes, entrées in 14, and each order has a time clock counting down next to it. When a cook finishes a dish, he hits a button – “bumps” it – and, on my screen, it turns green. If an order is running over its allotted time, it gets highlighted in angry, blinking red.

Around 4: 00, with the kitchen still slow, a young black woman named Claudette replaces Tony. She ties on an apron and sidles up alongside me, humming with energy, and starts barking at the cooks immediately in English I don’t yet fully understand: Where’s that Cowboy? How long on that sweet and spicy for 53? Is there an Orange Chick Bowl coming? Can I get a five-ounce? She tells me to get ranch for the barbeque wings, blue cheese for the hot ones, and a scoop of sour cream on top of those nachos, thanks. During the lulls, she breaks into Haitian Creole with Geoff, the dark-skinned cook on mids, swinging between coy laughter and sass. She bumps tickets with abandon, clears the screen as fast as it fills up, and bosses me around without being a bitch. I like her immediately.

She turns to me. You ever work in a kitchen before?

She stares at me. How old are you?

Thirty-three. Why, how old are you?

You look – a lot less than thirty-three.

You’re just a baby, I tease, and she shoots me a look of disdain in return.

I ain’t no baby. I got a baby, she says, and turns back to the line.

We go on like this for a few hours and then another manager, Matt, tells me to take my break a little before 6. They might send me home as early as 7 or 8, he says, but I might as well get some food; since I’m in training, I can order off the whole menu for free.

I put my order in for a Shrimp Island – skewers of grilled shrimp on a bed of rice seasoned with cilantro and citrus.