← Does this Explain our BBQ and Campfire Attraction?
The Failure of Functional Excellence → 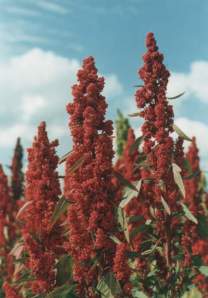 One of my favorite quick-to-prepare recipes is quinoa salad. I make it because I like how it tastes but what the heck is “ki-nwa”? From what I can gather it is not a grain like wheat, but is a chenopod, related to beets or spinach. Consequently, quinoa has nutritional characteristics that are noteworthy: high levels of protein (about 14% by mass) that is also a complete protein (a protein that contains all 9 of the essential amino acids necessary for the dietary needs of humans (and most other animals), high levels of fibre, phosphorus, magnesium, potassium, and iron. Apparently, there is also data indicating strong anti-inflammatory properties as well as heart-healthy fats like monounsaturated fat (in the form of oleic acid).

Like many other things, our ancestors figured this stuff out a long time ago. The Incas thought (with good reason it turns out) of quinoa as sacred. However, during the European colonization of South America, the Spanish actively suppressed its cultivation due to its status in the indigenous non-Christian ceremonies and instead grew wheat. Now, after a long consignment in the fringes of “health food,” the under-loved quinoa is making a comeback. Noted The Economist recently:

A few decades ago Peruvians looked down on quinoa, a fixture of Andean diets for centuries, as food for the poorest of the poor—when it was not being fed to chickens. Evo Morales, Bolivia’s first indigenous president, declared 2012 the “year of quinoa” to reverse discrimination against “Indian” foods.

Yet this protein-rich chenopod, a member of the spinach family, no longer needs Mr Morales’s help. Thanks to a growing global appetite for organic foods, Bolivia earned $64m from quinoa exports in 2011, 36% more than in 2010. Peru banked $23m, almost twice as much as the year before. “Quinoa consumption in industrialised countries used to be a niche market, but…in the past few years we have seen a major leap in demand and pricing,” says Francisco Diez-Canseco of Grupo Orgánico Nacional, a Peruvian exporter. He says that the UN’s decision to take a cue from Mr Morales and make 2013 the international year of quinoa could push foreign food firms to use it in their products.

As the market for quinoa has grown, so have efforts to cultivate it. In Peru production has risen from 7,000 tonnes a year in the 1980s to 42,500 tonnes last year, aided by new growing regions like the department of Arequipa.

In Bolivia, where land suitable for quinoa is scarce, farmers are squabbling over existing plots. In March residents of two indigenous towns fought with sticks and grenades over the right to grow quinoa in a disputed arid area on their border, leaving 34 people injured. Following days of negotiations and sporadic outbursts of violence, the two sides agreed to share the crop, pending GPS mapping and the presentation of historical documents on boundary claims.

Paradoxically, the increasing popularity of quinoa may hinder Mr Morales’s campaign to boost local consumption. As world prices rise, Bolivian producers have an ever-greater incentive to ship their crops abroad rather than squander them at their own dinner tables. Whether they will use the proceeds on similarly healthy foods—which are a rarity in the remote highlands—remains to be seen.

There really isn’t any one recipe for quinoa salad; you can make any kind of variant you like but they tend to revolve around some herbs (usually things like cilantro or basil), some sweet element (like raisins), a bit of olive oil, something acidic like red vinegar and or the juices of a lemon, sometimes some pine nuts added, and then something like finely diced cucumber or perhaps oranges etcetera. In other words, a salad with a nice tangy-sweet balance. Here’s one of many recipes: http://www.foodnetwork.com/recipes/quinoa-salad-recipe/index.html 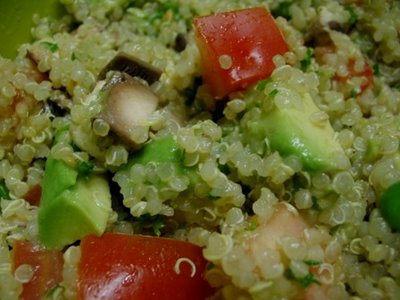