← What Does It Take to Become a “Certified” Black Belt or Master Black Belt?
Keen for Quinoa →

Does this Explain our BBQ and Campfire Attraction?

Have you noticed how anything with a flame, like a BBQ, and even more potently a campfire, draws people in and around it like a magnet. We talk, but we speak to the fire. It is perhaps one of the last things in our experience that can make us give the bloody smartphone a rest and just stare at the flicker of light. Is this perhaps some deep-rooted ancestral memory and evolutionary-encoding at work? A recent research report by a team led by the University of Toronto reported finding in the Wonderwerk cave system in South Africa, physical evidence of fires — ash, tools, animal bones — a million years ago.

The analysis pushes the timing for the human use of fire back by 300,000 years, suggesting that human ancestors as early as Homo erectus may have begun using fire as part of their way of life,” said U of T anthropologist Michael Chazan, co-director of the project and director of U of T’s Archaeology Centre.  The research was published in the Proceedings of the National Academy of Sciences on April 2.

Wonderwerk is a massive cave located near the edge of the Kalahari where earlier excavations by Peter Beaumont of the McGregor Museum in Kimberley, South Africa, had uncovered an extensive record of human occupation.  A research project, co-directed by U of T’s Chazan and Liora Kolska Horwitz of Hebrew University, has been doing detailed analysis of the material from Beaumont’s excavation along with renewed field work on the Wonderwerk site.

Analysis of sediment by lead authors Francesco Berna and Paul Goldberg of Boston University revealed ashed plant remains and burned bone fragments, both of which appear to have been burned locally rather than carried into the cave by wind or water.  The researchers also found extensive evidence of surface discoloration that is typical of burning.

“Socializing around a camp fire might actually be an essential aspect of what makes us human.”

Funding for the research was provided by the Social Sciences and Humanities Research Council of Canada, the National Science Foundation and the Wenner Gren Foundation.  Other team members include James Brink and Sharon Holt of the National Museum, Bloemfontein, Marion Bamford of the University of Witswatersrand and Ari Matmon and Hagai Ron of Hebrew University. Research at Wonderwerk Cave is carried out in collaboration with the McGregor Museum, Kimberley and under permit for the South African Heritage Resources Agency. 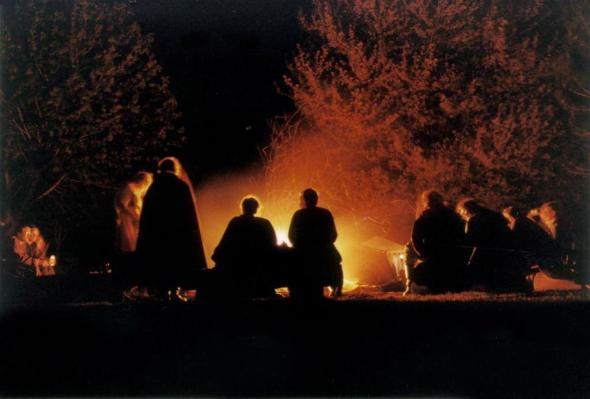