← A Humbling Perspective
Idli and Growing the Top Line →

Memory-foam is a dense material that softens in reaction to body heat; it is both denser and more responsive to heat than standard mattress foam. It consists of tiny air-filled cells that compress when pressure and heat are applied. The cells closer to the body release their air, allowing the foam to mold to the body’s shape.

The material dates back to 1966, when it was developed for NASA to absorb shock in spacecraft seats. It also has been used in football helmets and padding for the insides of shoes. A North Carolina-based company called Dynamic Systems still manufactures memory foam for automotive and aircraft seating, though the patents on the technology have long since expired.

Memory-foam mattresses arrived on the market in the late 1990s, as work lives went 24/7 and folks began hunting far and wide for help in getting to sleep. Nearly 60% of Americans experience insomnia symptoms or sleep disorders, according to market-research firm Marketdata Enterprises. That, in turn, has created a thriving market for sleep aids, including pills, high-tech pillows, white-noise machines, aromatherapy, and, of course, premium mattresses.

Memory-foam mattresses, which can cost anywhere from several hundred to several thousand dollars, aren’t the most expensive models on the market. A queen-size Tempur-Pedic mattress generally ranges from $3,000 to $7,500, depending on the materials. Mattresses from Sweden’s Duxiana, made with multiple layers of more than 1,500 springs, are significantly pricier, at around $10,000, while $15,000 will get you a Relyon mattress, manufactured in the U.K. with hand-made coils. And Hästens, a 160-year-old Swedish manufacturer, makes the Vividus, a $67,000 made-to-order mattress. Hand-stitched, its mattresses are filled with an intricate blend of horsehair (good for ventilation), cotton, wool (for perspiration absorption), and flax (for strength and elasticity).

Memory-foam is geared more toward the mass affluent, making it the Lexus of bedding, so to speak. Barron’s recently visited a Sleepy’s store in Manhattan to kick the tires.

We zeroed in on the $3,000 Cloud Supreme from Tempur-Pedic, and lay down on it. The surface seemed to melt away as the mattress began to conform to our particular shape. It seemed very NASA-like, putting us in mind of floating inside a space shuttle. At one point, the salesman put his keys down on the mattress and asked us to lay back down on top of them. The keys initially felt like a lump, then melted away into the mattress, becoming virtually unnoticeable. With memory foam, the princess never would have found that pea.

The leading firm at the moment is Tempur-Pedic, but like smartphones and tablets, the competition is heating up. 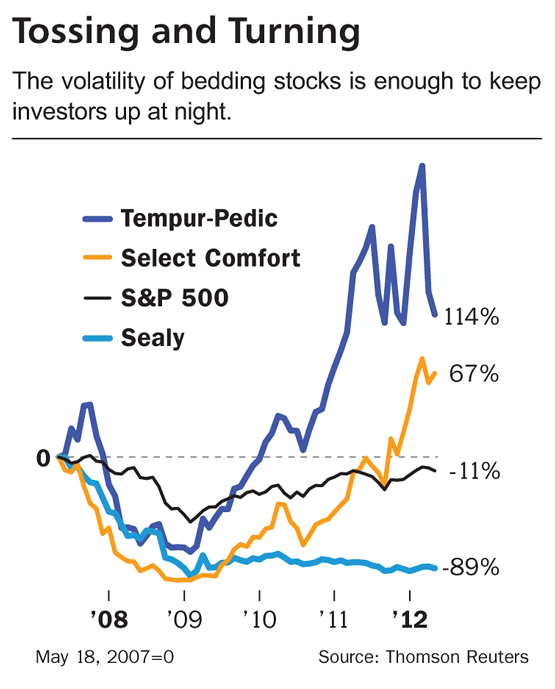 Since issuing shares to the public in 2003, Tempur-Pedic’s stock price has soared 274%. Sales have risen to $1.4 billion, topping all other mattress makers. But Tempur-Pedic’s rise has gotten bumpier in recent years as traditional-mattress makers have begun offering memory foam.

The unintended consequence is the interesting physics issues that memory-foam mattresses generate.

While these products support the body just-so during sleep, they distress some people during sex. The complaint is lack of “traction,” if you get the drift. “It’s like trying to do it in quicksand,” one owner writes on an Internet message board. New York sex therapist Sari Eckler Cooper couldn’t be clearer: “There’s a lack of resistance for the knees and feet. And whoever is on the bottom is sinking into the bed.”

These are memory-foam mattresses, and they are far and away the fastest-growing segment of the $4.6 billion wholesale market for U.S. mat-tresses. Memory foam’s market share has shot up from 14% to nearly 20% in just the past eight years. In other words, mattress shoppers are weighing the risk — bad sex — against the promise — good sleep — and are voting with their eyelids: They choose to snooze.

It’s no secret that people are stressed out and exhausted in these hurried times. Baby boomers, the chief buyers of memory-foam mattresses, have the additional problem of creaky bones. Everyone could use a deep, soothing sleep. But at the possible expense of sex?

Nick Robinson, the editor and publisher of the mattress-review site SleepLikeTheDead.com, analyzed as many comments about memory foam as he could find on the Web and concluded that about 40% of owners say that sex is less than ideal. Still, Robinson says, some 80% of memory-foam owners are satisfied with their beds — the highest rate of any mattress variety on the market. The implications of the math are clear: Many people don’t really care if the sex is lousy as long as the sleep is good.

Not surprisingly, Tempur-Pedic’s CEO. Mark Sarvary, has a different view. He says the company tracks the reasons people give for returning mattresses under its 90-day return policy. People who say the mattresses are too hot make up a tiny percentage, he says. And even fewer return them because of difficulty with sex.

“In all honesty, I have never seen a return for that reason,” Sarvary says. “It’s conceivable that people aren’t buying our beds because of that, but if you speak to the legions of people who own these beds, this isn’t an issue for them.”

Sari Eckler Cooper, the New York sex therapist, says some clients decided to give up their memory-foam mattress because it was impeding their sex life and causing marital disagreement. Some others, based on the message boards, have stopped using the beds for sex, taking their hanky-panky elsewhere.

There is, in fact, a long tradition of experimenting with bedroom furniture, says Elizabeth Cromley, a professor of architectural history at Northeastern University. In the 1930s, reflecting Hollywood’s then-cautious standards for bedroom scenes, twin beds became fashionable. The 1933 World’s Fair in Chicago featured an ultra-modern home whose marital sleeping quarters were divided into two separate wings: His half had a twin bed and shower, while hers had a double bed and a bathtub. “The husband was supposed to visit the wife,” Cromley says.

The 1970s welcomed the waterbed, which was also supposed to relieve pressure on the body by conforming to its particular shape. Sales peaked in 1987 at 22% of the U.S. mattress market, and then people grew tired of all the sloshing. Today, waterbeds are little more than a retro novelty.

“In my research, I’ve found that for every decade, the bedroom is the location for some neurosis,” says Cromley. “If it wasn’t a sexual worry, it was a worry about dust and germs or a worry about tuberculosis. Now people are working like crazy and are worried that they won’t get a good night’s sleep.”

For some boomers, then, buying a mattress that may work better for sleep than for sex probably isn’t much of a compromise. If you can fool around a little bit once in a while, where’s the problem?

That bodes well for memory foam’s chances of lasting longer than waterbeds, and in its own way, is a fitting coda to the sexual revolution. At long last, people are rolling over and going to sleep.