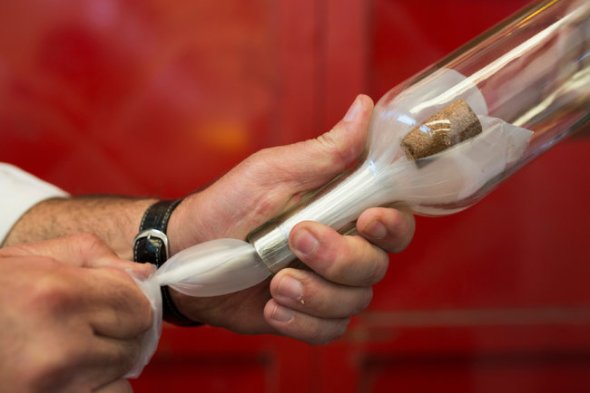 The Odon Device is named after Jorge Odon, a 60 year-old Argentinian car mechanic who, after seeing a You Tube video on how to extract a cork trapped in a wine bottle, designed and built a device to more effectively and safely extract a baby stuck in a birth canal. The device has the endorsement of the World Health Organization, major donors, and an American medical company has licensed it for production.

“The Odon device, developed by WHO and now undergoing clinical trials, offers a low-cost simplified way to deliver babies, and protect mothers, when labour is prolonged. It promises to transfer life-saving capacity to rural health posts, which almost never have the facilities and staff to perform a C-section. If approved, the Odon device will be the first simple new tool for assisted delivery since forceps and vacuum extractors were introduced centuries ago.”
Dr Margaret Chan (from the Odon Device website)

With the Odón Device, an attendant slips a plastic bag inside a lubricated plastic sleeve around the head, inflates it to grip the head and pulls the bag until the baby emerges. Doctors say it has enormous potential to save babies in poor countries, and perhaps to reduce cesarean section births in rich ones.

“This is very exciting,” said Dr. Mario Merialdi, the W.H.O.’s chief coordinator for improving maternal and perinatal health and an early champion of the Odón Device. “This critical moment of life is one in which there’s been very little advancement for years.”

About 10 percent of the 137 million births worldwide each year have potentially serious complications, Dr. Merialdi said. About 5.6 million babies are stillborn or die quickly, and about 260,000 women die in childbirth. Obstructed labor, which can occur when a baby’s head is too large or an exhausted mother’s contractions stop, is a major factor.

In wealthy countries, fetal distress results in a rush to the operating room. In poor, rural clinics, Dr. Merialdi said, “if the baby doesn’t come out, the woman is on her own.”

The current options in those cases are forceps — large, rounded pliers — or suction cups attached to the baby’s scalp. In untrained hands, either can cause hemorrhages, crush the baby’s head or twist its spine.

Although more testing is planned on the Odon Device, doctors said it appeared to be safe for midwives with minimal training to use.

From his interview of Mr. Odon, McNeil wrote:

Mr. Odón described the origins of his idea. He tinkers at his garage, but his previous inventions were car parts. Seven years ago, he said, employees were imitating a video showing that a cork pushed into an empty bottle can be retrieved by inserting a plastic grocery bag, blowing until it surrounds the cork, and drawing it out.

That night, he won a dinner bet on it.

At 4 a.m., he woke his wife and told her the idea that had just come to him. (His own children were born without problems, he said, but he has an aunt who suffered nerve damage from birth.) His wife, he recalled, “said I was crazy and went back to sleep.”

Jorge showed his idea first to an obstetrician at a local hospital and then the chief of obstetrics at a major hospital in Buenos Aires. This lead to an introduction to Dr. Merialdi at a 2008 medical conference in Argentina, who

granted Mr. Odón 10 minutes during a coffee break. The meeting instead lasted two hours. At the end, Dr. Merialdi declared the idea “fantastic” and arranged for testing at the Des Moines University simulation lab, which has mannequins more true-to-life than a doll and a jar.

It is too early to know what BD will charge but each device should cost less than $50 to make. While the company expects to profit on all sales, it will charge poor countries less.

“But first, this problem needed someone like Jorge,” he said. “An obstetrician would have tried to improve the forceps or the vacuum extractor, but obstructed labor needed a mechanic. And 10 years ago, this would not have been possible. Without YouTube, he never would have seen the video.”

It’s this last point that is both a source of hope as well as a caution: the internet makes it possible for a car mechanic to see a video of a cork in a wine bottle that inspires an important innovation, but all too often “experts” can either block ideas because they do not fit the accepted norm or come from a source outside of the paradigm, or they are unable, as Dr. Merialdi points out, to think laterally because they are too close to current practices.

Fortunately this did not happen in the case of the Odon Device, but it is a lesson on the importance of a generous mindset to foster true innovation.

From The New York Times