← Cover Me
HAL, How Are You Feeling Today? →

Clive Thompson’s book “Smarter Than You Think” argues how technology continues to alter for the better how we think.  His thesis is that ” every technological innovation—from the printing press to the telegraph—has provoked the very same anxieties that plague us today. We panic that life will never be the same, that our attentions are eroding, that culture is being trivialized. But as in the past, we adapt—learning to use the new and retaining what’s good of the old.”

Yet despite these concerns he makes the case that technology, especially internet-enabled, is already demonstrating the potential for a new level of insight. One of the better examples provided is how a public game, Fold-It, devised by a scientist, marshaled the resources of many people, most amateurs, to solve a complex biological problem involving the structure of a virus.

One of the best cases described in the book is that of David Baker, a biochemistry professor at the University of Washington who studies how proteins work, specifically how any given protein folds. How the string of molecules that comprise a protein strand folds upon itself is a major element of determining how the protein works. If one can decipher how a protein works, you have a big piece of the puzzle of how to work with that protein such as how to counteract it if it is a protein that causes problems, such the virus that causes a disease.

Baker had tried to solve the problem of figuring out how various proteins were folded using the brute-force method of throwing massive computer power at the problem, to churn through permutations and combinations of possible folds. To get the horsepower needed (at a low-cost) he decided to distribute a computer application called Rosetta@Home to tap into the idle computing power of anonymous users across the web. It ran as a screen saver that, as your computer sat idly, randomly folded proteins. But in pursuing this avenue, he discovered that people approached him saying that they wanted to try to fold the proteins themselves because they could see their computer dumbly trying random folds when it appeared another set of folds might “solve the puzzle.”

In response, Baker got hold of some programmers and created a game called Fold.It where users could take a protein string and fold it themselves. If you found a way to more elegantly fold a protein you received a higher score. Suddenly over 200,000 people were playing “the game.” Teams were formed; chat rooms set up to exchange tactics. One result was that the fold pattern of a virus, M-PMV that causes AIDS in monkeys was solved by the collective in three weeks; researchers had been trying for a decade.

The results were published in the delightfully titled “Crystal structure of a monomeric retroviral protease solved by protein folding game players” in the journal Nature Structural & Molecular Biology:

Following the failure of a wide range of attempts to solve the crystal structure of M-PMV retroviral protease by molecular replacement, we challenged players of the protein folding game Fold It to produce accurate models of the protein. Remarkably, Foldit players were able to generate models of sufficient quality for successful molecular replacement and subsequent structure determination. The refined structure provides new insights for the design of antiretroviral drugs.

Foldit is a multiplayer online game that enlists players worldwide to solve difficult protein-structure prediction problems. Foldit players leverage human three-dimensional problem-solving skills to interact with protein structures using direct manipulation tools and algorithms from the Rosetta structure prediction methodology. Players collaborate with teammates while competing with other players to obtain the highest-scoring (lowest-energy) models. In proof-of-concept tests, Foldit players—most of whom have little or no background in biochemistry—were able to solve protein structure refinement problems in which backbone rearrangement was necessary to correctly bury hydrophobic residues. Here we report Foldit player successes in real-world modeling problems with more complex deviations from native structures, leading to the solution of a long-standing protein crystal structure problem.

Below, in the somewhat dry wording of science journals, is the really cool solving of the M-PMV fold pattern. Mixed in the science-speak are references to specific game players such as “spvincent,” “grabhorn,” and “mimi.”

M-PMV retroviral protease structure improvement by the Foldit Contenders Group. (a) Progress of structure refinement over the first 16 days of game play. The x axis shows progression in time. To identify a solution as correct by molecular replacement using Phaser, the model must have an LLG better than the best random models. The distribution of these best random predictions is indicated by the intensity of the pale blue band. (b) Starting from a quite inaccurate NMR model (red), Foldit player spvincent generated a model (yellow) considerably more similar to the later determined crystal structure (blue) in the β-strand region. (c) Starting from spvincent’s model, Foldit player grabhorn generated a model (magenta) considerably closer to the crystal structure with notable improvement of side-chain conformations in the hydrophobic core. (d) Foldit player mimi made additional improvements (in the loop region at the top left) and generated a model (green) of sufficient accuracy to provide an unambiguous molecular replacement solution which allowed rapid determination of the ultimate crystal structure (blue). 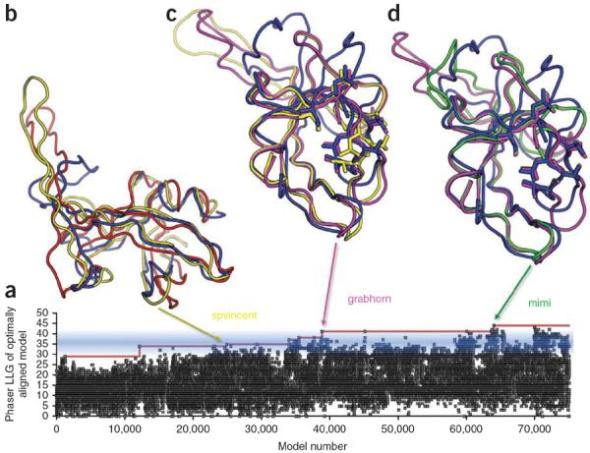 Perhaps the most important thing to take away from this story and book is this:

The limitation of top-down control by bosses was always present, it is just that now we can see the power of tapping into the ideas and energies of many people in a more self-organizing manner. To achieve breakthrough improvements in performance we need to empower as many people as possible in process teams. Good lean six sigma practitioners have always known this; it just the bosses that need to get the memo.