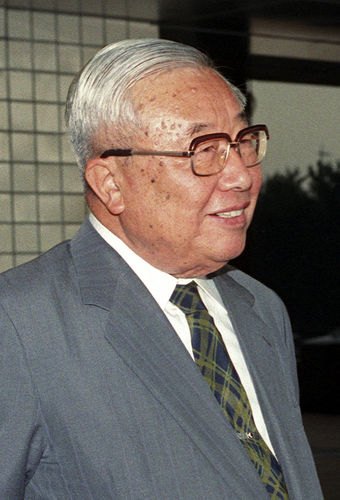 Not many people can lay claim to changing not just their business but many businesses in multiple industries — health care, government, hospitality. Eiji Toyoda did that and in doing so also proffered a different model of leadership. True, his Japanese background meant that his approach was different than North Americans or Europeans, but is approach both reflected and influenced how Toyota evolved. So many leaders are superficial in their understanding of the guts of the operations that enrich their companies. The Telegraph’s obituary offered this:

Eiji Toyoda was born on September 12 1913 in Nagoya, central Japan. The original Toyoda family business was in textile manufacturing. Eiji’s uncle Sakichi was an entrepreneur-inventor who devised a series of improvements to textile machinery, culminating in a design for an automatic loom which set a new international standard in the 1920s. In the early 1930s income from selling the rights to Sakichi’s loom to a British company, Platt Bros, funded his son Kiichiro Toyoda’s ambition to enter the glamorous world of car manufacturing.

Having studied mechanical engineering at Tokyo University, Eiji joined cousin Kiichiro in 1936 to work on the prototype Toyota A1 six-cylinder sedan, which closely resembled the Chrysler Airflow model of the era. The Toyota Motor Company was officially founded in 1937, and Eiji was given charge of building a new factory headquarters on a forested site at Koromo — a small town outside Nagoya which grew with the factory, and changed its name to Toyota City in 1959.

After the disruption of the war years, the Toyota business was close to bankruptcy and suffered an extended strike by workers whose wages had not been paid. Kiichiro Toyoda was forced out in a restructuring imposed by the Japanese government, but Eiji was promoted in 1950 to managing director. Toyota was still producing very modest numbers of cars, but he travelled to America to see Ford’s River Rouge mass-production facility plant at Dearborn, Michigan, returning awestruck by its scale but scornful of its inefficiencies.

With a veteran Toyoda loom engineer, Taiichi Ohno, Eiji set out to perfect the “Toyota Way”. This was a combination of just-in-time stock control through a short supply chain and the kaizen practice (in fact the idea of an American statistician called Deming, but adopted and developed in Japan) of involving the whole workforce in “continuous improvement”.

It was overlaid on an aspirational philosophy laid down by Sakichi Toyoda in earlier days, and the result was a nimble, cost-conscious manufacturing system that eliminated virtually all wastage of materials, labour and time. Though Toyota has suffered the embarrassment of model recalls due to faulty components in recent times, the Toyota Way remains the envy of factory managers the world over.
Eiji Toyoda died in the Toyota Memorial Hospital, originally a clinic for company workers, in Toyota City. He is survived by his three sons, all Toyota executives.

Eiji Toyoda, who spearheaded Toyota Motor Corp.’s expansion in the U.S. as the automaker’s longest-serving president, has died. He was 100. He died today at Toyota Memorial Hospital in Toyota City, Japan, the company said in a statement. The cause was heart failure.

During his 57-year career, the younger cousin of Toyota Motor’s founder helped reshape a maker of Chevrolet knockoffs into an automaker whose manufacturing efficiency became the envy of General Motors Corp. (GM) and Ford Motor Co. By the time he stepped down in 1994, the company was assembling Corollas in the U.S., had started the Lexus luxury brand and had initiated a project that would develop the world’s most successful gas-electric vehicle, the Prius.

“He played an important role in leading Toyota’s expansion into North America, and in developing the carmaker into a global company,” Japan’s Chief Cabinet Secretary Yoshihide Suga, said at a press conference in Tokyo. “He was someone who was indispensable to the nation’s entire industry.”

In 1950, during its occupation of Japan, the U.S. Army sent Toyoda to Dearborn, Michigan, to learn about mass production from Ford. The U.S. needed Toyota to build trucks for its troops in Korea.
Toyoda concluded that Ford was barely ahead of the much-smaller Toyota in terms of technology. Back in Japan, he concentrated on making cars in small batches at maximum efficiency. He began using IBM machines to cut production costs, according to Kazuo Wada, professor of economics at the University of Tokyo and author of “A Fable on Manufacturing: Ford to Toyota.”

Building on the work of his cousin, Toyoda developed what became known as the Toyota Production System, which aimed to eliminate excess inventory of parts and other waste. The manufacturing system became so successful it was eventually adopted by other carmakers, and by manufacturers outside the automotive industry.