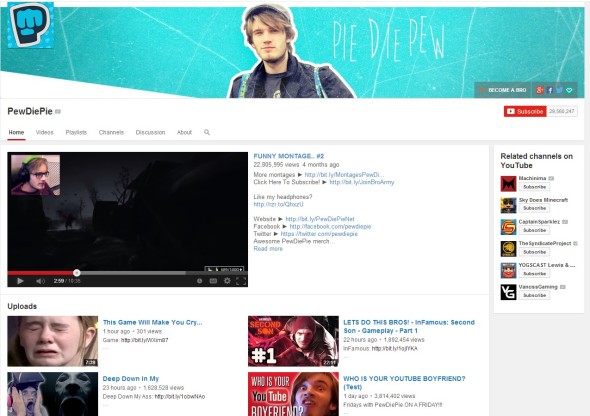 A recent article in The Wall Street Journal by Sven Grunberg and Jens Hansegard once again highlights the tremendous gulf between the 99.99% and the 0.01% except in this case the representative from the 0.01% is, in his particulars, a creature, or creation, of the most recent of phenomena — video and mobile games. Felix Kjellberg, who also answers to PewDiePie, is a Swede who earns millions by videoing his game playing and rakes in about $4 million in ad sales through YouTube. Advertisers are willing to pay for ads on his site because he has, as of this summer, 27 million subscribers. According to the The Wall Street Journal:

In December 2012, PewDiePie signed on with Maker Studios, a producer of online content that takes a cut of ad sales. Maker Studios—which counts on PewDiePie as its most important personality— sold itself to Walt Disney Co. earlier this year in a deal that could be worth close to $1 billion, depending on certain performance targets.

His following is so big that even games he criticizes get coveted publicity. Earlier this year, he made a clip headlined “Flappy Bird—Don’t Play This Game,” in which he curses a blue streak while he tries to conquer the then-unknown mobile app. Before long, millions of people had downloaded the game. It helped propel “Flappy Bird” and its Vietnamese developer from obscurity into a world-wide sensation. Mr. Kjellberg also is inadvertently helping to shape the industry, as developers have started making games that aren’t just fun to play, but also to watch others play on YouTube, like indie horror games.

“It’s cool to have this kind of influence, but at the same time it’s kind of scary,” said Mr. Kjellberg, speaking in a rare interview. He routinely turns down media requests, citing a busy schedule that includes publishing multiple clips a day of himself playing obscure games from an apartment south of London.

While his subscriber base creates unparalleled reach on Google Inc.’s YouTube, his success reflects broader momentum for the trend in watching other people play videogames. One of his peers is Jordan Maron, a 22-year-old American known as “Captain Sparklez” who has attracted 7.5 million subscribers with videos related to Mojang’s popular Minecraft building-block game.

Production quality isn’t a key selling point. Mr. Kjellberg’s creation process is quick, dirty and done mostly solo. “Unlike many professionally produced shows, I think I’ve established a much closer contact with my viewers, breaking the wall between the viewer and what’s behind the screen,” he said. “What I and other YouTubers do is a very different thing, it’s almost like hanging around and watching your pal play games. My fans care in a different way about what they are watching.”

YouTube is playing a more integral role in the experience of gamers. Last week, Sony Corp. announced an update to PlayStation 4 that integrates the online video service into the console so clips of game play can be easily shared.

Mr. Kjellberg’s career took flight while attending college in Gothenburg, on Sweden’s southwest coast. He attended few classes, spending more time at home playing games and uploading to YouTube. After dropping out, he started selling hot dogs. To pad the number of views on his channel during those early days he would repeatedly hit F5 on his keyboard to refresh the browser. As for the name PewDiePie, he said that his original YouTube account was for PewDie—“pew” to sound like a laser gun, and die for death—but he lost the password and had to create a new account under a new name, so he added Pie.

Your correspondent found that watching PewDiePie is indeed strangely addictive and is very much like hanging out with some pals goofing off for an afternoon (and/or evening); I suppose work productivity would take a hit if the hanging about became days but, then again, if you are clever like Mr. Kjellberg, your work product is all about hanging around. More power to him.