A Cartographic Analysis of the 2016 U.S. Presidential Election

The social and political aftermath of the 2016 U.S. Presidential election is still unfolding and will for some time to come. It is said that we are in a “post-truth” world. Oxford Dictionaries has just named this phrase the word of the year.  The Guardian wrote:

In the era of Donald Trump and Brexit, Oxford Dictionaries has declared “post-truth” to be its international word of the year.

Defined by the dictionary as an adjective “relating to or denoting circumstances in which objective facts are less influential in shaping public opinion than appeals to emotion and personal belief”, editors said that use of the term “post-truth” had increased by around 2,000% in 2016 compared to last year. The spike in usage, it said, is “in the context of the EU referendum in the United Kingdom and the presidential election in the United States”.

“It’s not surprising that our choice reflects a year dominated by highly charged political and social discourse. Fuelled by the rise of social media as a news source and a growing distrust of facts offered up by the establishment, post-truth as a concept has been finding its linguistic footing for some time.”

According to Oxford Dictionaries, the first time the term post-truth was used in a 1992 essay by the late Serbian-American playwright Steve Tesich in the Nation magazine. Tesich, writing about the Iran-Contra scandal and the Persian Gulf war, said that “we, as a free people, have freely decided that we want to live in some post-truth world”.

xraydelta, however, tries to operate in the fact-based world, at least as much as is possible (I say fact-based because “truth” is an even more profound, philosophical ideal).

That is why the analysis of the 2016 Presidential vote using the technique of cartographics catches this correspondent’s eye. First, the technique is useful for a variety of analyses and second it helps illuminate a vote that may have been one of the most important in American history.

A team led by Mark Newman, Anatol Rapoport Distinguished University Professor of Physics in the Department of Physics and Center for the Study of Complex Systems at the University of Michigan created the maps:

A cartogram is a map in which the sizes of states are rescaled according to their population. On such a map, for example, the state of Rhode Island, with its 1.1 million inhabitants, would appear about twice the size of Wyoming, which has half a million, even though Wyoming has 60 times the acreage of Rhode Island.

Here is a map of US counties, colored red and blue to indicate Republican and Democratic majorities respectively:

Here is the cartogram of the country-level results: 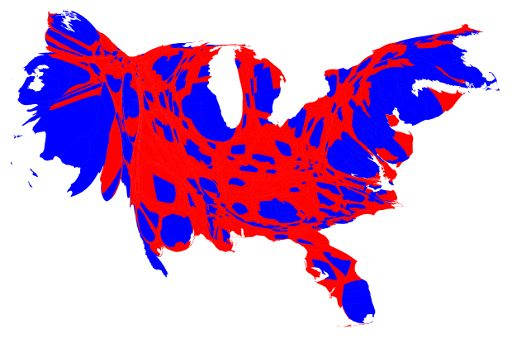 However, this map is still somewhat misleading because we have colored every county either red or blue, as if every voter voted the same way. This is of course not realistic: all counties contain both Republican and Democratic supporters and in using just the two colors on our map we lose any information about the balance between them. There is no way to tell whether a particular county went strongly for one candidate or the other or whether it was relatively evenly split.

One way to reveal more nuance in the vote is to use not just two colors, red and blue, but to use red, blue, and shades of purple in between to indicate percentages of votes. Here is what the normal map looks like if you do this:

Finally, the cartogram of the county-by-county results using color gradation: 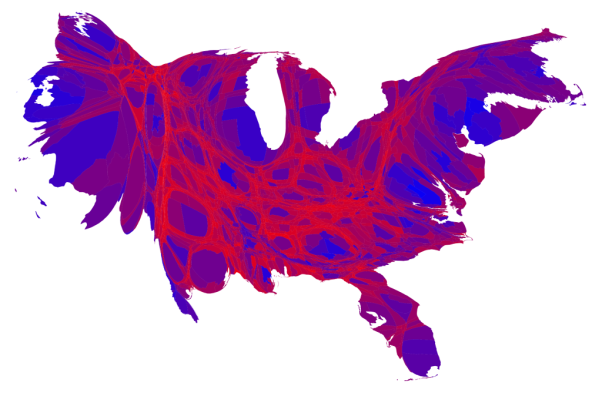 I’ll admit that applying cartographic techniques to this particular case is not especially useful in light of the emotions that are at work in the U.S. It’s not as if this graphic “solves” any of the issues. But the technique is generally helpful to present data in ways to help interpret events and issues.

However, if we are living in a fact-free or fact-less epoch, then I suppose no amount of data analysis matters.