← Decentralization of Healthcare: An Example of a Key Lean Flow Principle in Action
The People Who Train the Robots to Do Their Own Jobs →

For several years firms such as Zara were the best examples of applying principles of lean flow to clothing retailing such as shorter lead times through simplified processes that allowed for less inventory and increased responsiveness to actual customer demand.

Now Amazon is working hard to push further into the clothing sector. It is arguably a much more difficult challenge than books or music. Clothing is more fragmented and there is the issue of overcoming both the resistance to buying something you can’t try on first and the costs of free returns that online shops had to offer to overcome those concerns.

But Amazon is exploring an approach that embraces the penultimate lean flow approach — custom-made clothing.

According to The New York Times

Amazon has developed a camera and scanning software designed to automatically determine customers’ measurements and upload them to their accounts, according to the person familiar with Amazon’s apparel talks, who saw an early prototype of the device.

The source said the device resembled a camera product that Amazon announced last week, Echo Look, the latest in a line of gadgets powered by the company’s Alexa intelligent assistant.

Amazon has described the device as a kind of digital fashion adviser, allowing people to upload photographs of themselves to get style recommendations through a combination of software algorithms and human fashion specialists. The company declined to say whether the device would be updated in the future to capture clothing sizes for customers.

Amazon has filed a patent for an on-demand clothing manufacturing system. I don’t know if it is a joke or an indication of intent, but notice how in the drawing below there’s just one human-looking object, and that might even be a robot designed to look human. I have no doubt that, in terms of economics, the goal is to build this custom clothing process to operate entirely without humans.

The process starts when customers submit online orders to the retailer for shirts and other articles of clothing, accessories, bedding, curtains and towels. The patterns, printed onto rolls of fabric or other material, are arranged to reduce scrap.

A “cut engine” then carves out the various pattern pieces, while cameras analyze them to make sure they aren’t being distorted in the process. 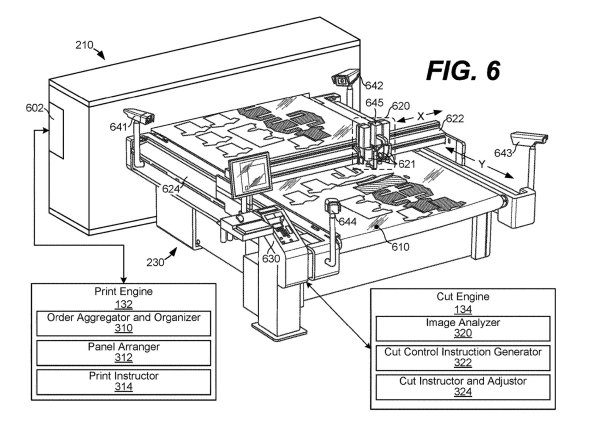 A robotic arm with a mechanical gripper places all the pieces into a tote on a conveyor belt.

The conveyor belt delivers the totes to a sewing station, where “an attendant and/or automated sewing machine” stitches the item together. The items are then examined at a quality control station, packed up and shipped to customers.