← Open the Wine Bottle, HAL
The Return of Analogue: Board Games Make a Comeback →

Taking Away Some of the Randomness from a Random Universe

Achieving excellence in process is a blend of art and science, left and right-brain approaches. For example, in many areas of business, such as sales, we often hear how it “is an art, not a science” and that “process turns salespeople into robots” etc.

Here’s an example, however, of how something that is seemingly an unpredictable art — responding to the unpredictability of a football’s motion from moment to moment — into something that is aided by approaching the task as process. In this case, the process is the manner in which football players practice receiving and passing balls. The improvement was to develop a machine, a system, called Footbonaut, as seen in this UEFA video.

It was developed by a German inventor Christian Güttler. When he started in 2006, the machine generated some interest, but not until it was used at a German Bundesliga club Borussia Dortmund in 2012, that interest exploded. It is said that the Footbonaut was a significant factor in Borussia Dortmund’s getting to the UEFA Champion’s League final in 2013.

The Footbonaut is a 14×14 meters cage with a circle in the middle where a player stands. The automated system fires balls at the player from four different angles and two different levels. Once the ball is released, the player has to control it and then pass it into one of 72 flashing green panels. If it takes him too long the light on the square turns yellow and then red. If you pass the ball when the square is green, you get the most points. All passes and touches are recorded and can be reviewed on an iPad, from which the Footbonaut is controlled. According to Güttler after 15 minutes of “in the cage” training the player will have received/passed the same amount of balls as in a week of training.

Dortmund’s success in recent years and the performances of players like striker Robert Lewandowski and midfielder Mario Gotze have attracted admiring glances from a host of top clubs. And former Mainz coach Klopp hopes the “Footbonaut” can help Dortmund maintain their stellar standards.

“It is the perfect tool to improve ball-handling skills,” said the 45-year-old. “It demands precise skills used at speed in a physically tough environment. It´s quite a package!”

“We can closely monitor a player´s development with data gleaned from the machine,” said Mislintat. “There is no reason why a player cannot translate the actions practised in this environment onto the actual playing field.”

In a review of a new book, “Das Reboot” by Raphael Honigstein, The Economist wrote:

Almost half of the goals scored in football are virtually random, reckons Martin Lames of the Technical University of Munich. And football’s best loved narratives—the come-from-behind win, the giant-killing—are those that upset expectations. But Raphael Honigstein’s new book “Das Reboot” focuses on the bits of the game that are not random, and how a well prepared team faces anything but a coin-flip.

After a long period as a footballing superpower, the German side became complacent. The nadir was the European Championships in 2000, when it failed to win a game, even losing to England in a match Mr Honigstein describes as “an all-round embarrassment of footballing poverty”. 14 years later, Germany would humiliate Brazil, the World Cup hosts, 7-1 before defeating Argentina to take home the trophy.

Interestingly, one player who used the Footbonaut at his club was Mario Gotze. Last year, at the 2014 World Cup, he controlled a cross with his chest and volleyed the ball into the net with a replica of the set of motions the training machine provided. Practice: 1, Random: 0. 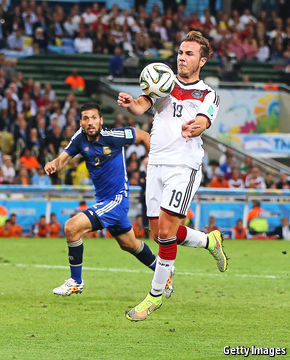