Some professions have a high propensity for travel. Process excellence professionals whether they are consultants or work as Lean Six Sigma Black Belts within an organization, are one example of the great archipelago of road warriors that routinely ply their trade from airport to hotel to airport. For Road Warriors the movie “Up in the Air” is an instructional documentary (think slip-on shoes), not fiction.

There are many websites and apps for the road warrior. Here is one that focuses on airline meals. Called AirlineMeals.net, the site is organized by airline, class of service, and year. The material is submitted by road warriors themselves. A cool example is a photo of a 1950’s Trans World Airlines First Class meal:

Drink: coffee cake
Note: Don’t know what this tasted like, but from speaking with those who worked for TWA back in the 50s, the airline served delicious meals-better than today’s meals. Despite this being a 1st class meal, all dishes, plates and bowls are made of plastic. Weight was more of a critical factor with the older piston powered airliners and this was also reflected in the meal service.

Here’s a more recent example from a contributor flying on a long-haul KLM flight: 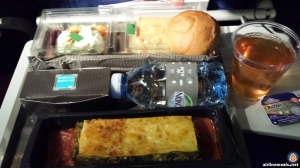 Apparently some airlines regularly monitor the site for comments and use them for staff training and for process improvement. According to the site host, a “40-something from Holland”

Airlines use the site as a quality control tool. One airline for example, used images from the site to point flight attendants to their mistakes (“the salt shaker should be right of the pepper shaker, not left”).

Lufthansa print every picture + comments, to show it to the person responsible for the catering on that particular flight, and he or she cannot return the print without having signed it, which indicates they have read the traveller’s comments.

In case you feel depressed, in general, about the much-to-be-desired state of airline food, then this won’t make you feel that much better: even in the utopian 2001: A Space Odyssey, the road warriors heading from the Earth to the Moon via the Pan Am Orion and the Ares 1B had to eat pabulum – literally. 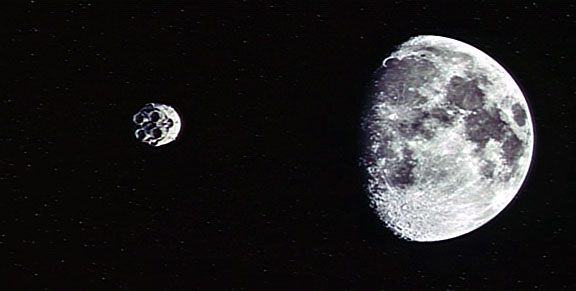