“Your Trash is Our Luxury”

…made scavenging an official occupation more than a decade ago. Its 1m catadores have raised recycling rates for cardboard and paper to 90%. Co-operatives get grants to buy equipment and can short-circuit the municipal-tendering process. In Belo Horizonte, in Brazil’s south-east, workers transform beer cans and other junk into intricate jewellery for the city’s fashion-conscious. Catadores there can make 1,700 reais ($800) a month from recycling and craft-making, well above the 678 reais minimum wage. (The Economist)

In developing countries, the UN estimates that scavengers collect between 50% and up to 100% of trash and “cuts costs to cities, helps the environment and reduces poverty. Suresh Jagtap, the city’s joint commissioner of waste management, says the scheme saved the city $2.2m a year. Waste-transport costs are around a tenth of those in other Indian cities, he says, because the pickers sort the rubbish close to where it is collected.”

When she was ten, Saru Waghmare started scavenging the open dumps of the western Indian city of Pune. It had been her family’s work for generations. But in 2008 the city awarded her co-operative a contract to collect refuse from 400,000 households. Workers got uniforms, gloves and pushcarts, modest health insurance, and for the first time in their lives a regular income of 36 rupees ($0.60) per month for each household they served. They keep the profit from any recyclables they sell. Many doubled or tripled their earnings. Five years on, all the children of the co-operative’s 2,300 members go to school. “Before, I would spend the whole day out in all-weather, fighting off dogs in containers,” says Saru. “Now I have dignity and I can save for my old age. I feel my future is bright.” (The Economist)

Although the number of waste pickers is difficult to estimate, the Global Alliance of Waste Pickers, which was started in Brazil in 2005 as a loose association, estimates there are at least 15 million people whose primary livelihood is trash picking.

On the Alliance’s website (http://globalrec.org/), we get to meet a few of the members: 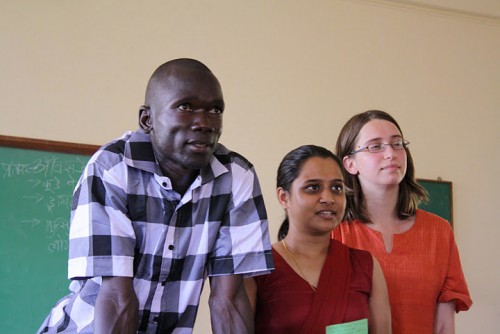 Aliou Faye lives in Diourbel, Senegal. He works with the Association Book Diom des Recuperateurs et Recycleurs in Mbeubeuss, a landfill serving the greater Dakar region. The association was founded in 1994. Aliou, who is 34 years old, has been recycling since he was 16.

“What motivates me to be a recyler is a familiar situation,” he said. “In order not to steal, to keep my dignity, and to avoid taking a second job.”

Aliou works primarily as a recycler but is also involved in other matters with his association, such as organizing and planning meetings.
“We want people to know that recycling is a business, recyclers need to be recognized and treated as citizens of society,” Aliou said. “Recyclers also need to organize, and go through training and capacity-building.”

Estela Soria lives and works in Costa Canaria, Uruguay. She works at the waste pickers’ cooperative, Cooperativa Ave Fenix, alongside twelve women and ten men of all different ages. Estela began working as an informal waste picker in 2002. Five years later, she began to work at the cooperative.

Her work as a waste picker includes many different responsibilities, including outreach at schools and in neighborhoods about the importance of source separation.

“I hope that the world will recognize my small country, where one of the biggest struggles is for gender equality, where men and women work together in all work spaces, and especially in the area of recycling,” said Estela. “Today many people discriminate against waste pickers and don’t see what we do as a profession.”

Nohra Padilla (on the left in the photo) is a third generation recycler. She began working with her mother, collecting recyclables from waste, when she was seven years old. Upon completion of secondary school Nohra could not afford university studies and so she too became a recycler.

When her livelihood was threatened, she organized with her fellow recyclers to form a cooperative. This process eventually led to the formation of the Asociación de Recicladores de Bogotá (ARB), now 18,000 members strong and consisting of 24 cooperatives. She is its executive director.

Although the municipality did close the dump, it gave the cooperatives money to help finance their activities so that they could continue their collection work in the streets.

Three years ago Nohra also received a scholarship to finally attend university. She is completing a degree in administration which will help to strengthen the skills she has developed while working to organize recyclers.