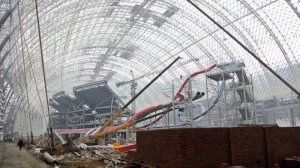 Just kidding; but sometimes you wonder at what point the limits of material science, economics, or plain old aesthetics begins to put a brake on the fantastical building projects in China. A recent post (Now That’s Stretch Goal!) focused on the building of the world’s tallest building in record time. Recently, the world’s longest bullet train line opened, the 1,425-mile high-speed rail system runs from Beijing to Guangzhou.

Not to be outdone, Chengdu, the capital of Sichuan province, is building the New Century Global Centre. It will be the world’s largest standalone structure at 100 metres high, 500 metres long and 400 metres wide, and with 1.7 million square  metres of floor space. By comparison the Pentagon in Washington — still one of the world’s largest  office buildings — is barely a third of the size with a mere 600,000 square  metres of floor space.

The city of 14 million people plans to expand its subway from two lines to 10  by 2020, build a new airport and become a new Silicon Valley.

The Global Centre will house offices, conference rooms, a university complex,  two commercial centres, two five-star hotels, an IMAX cinema, a “Mediterranean  village”, a skating rink and a pirate ship, among other attractions. About 400,000 square metres will be devoted to shopping, most of the outlets  high-end luxury brands.

Despite Chengdu being around 1,000 kilometres from the sea the complex has a  marine theme, with fountains, a huge water park and an artificial beach,  accented by the undulating roof, meant to resemble a wave.

“This is an ocean city built by man,” said guide Liu Xun. “There will be  1,000 rooms (in the hotel) and all will have seaside views.”

The thick smog that normally blankets Chengdu risks making it a sunless sea,  but visitors will not need to worry about that, she said.

“We have borrowed a Japanese technique. There will be an artificial sun that  will shine 24 hours a day and allow for a comfortable temperature,” Liu said.  The system uses specialised lighting technology that heats as well as  illuminates.

The centrepiece will be a 5,000 square metre artificial beach, to include a  rafting course and a “seafront” promenade, complete with parasols and seafood  outlets that can accommodate 6,000 people. A giant screen 150 metres long and 40 high will form the horizon and offer  sunrises and sunsets, accompanied by nautical breezes.