Clayton, Dubilier & Rice (http://www.claytondubilier.com/index.php) is a private-equity firm for those who believe in making money the “old-fashioned way,” by improving things. Early in my own career I had an opportunity to learn some tricks of the trade from CD&R as a young MBA grad who had the opportunity to do some research on how they work. Their track record was recently highlighted by The Economist:

Private-equity nabobs bristle at being dubbed mere financiers. Piling debt onto companies’ balance-sheets is only a small part of what leveraged buy-outs are about, they insist. Improving the workings of the businesses they take over is just as core to their calling, if not more so. Much of their pleading is public-relations bluster. Clever financial ploys are what have made billionaires of the industry’s veterans. “Operational improvement” in a portfolio company has often meant little more than promising colossal bonuses to sitting chief executives if they meet ambitious growth targets. That model is still prevalent today.

One shop which can plausibly claim to stand out from the crowd is Clayton, Dubilier & Rice (CD&R). Despite being among the oldest buy-out firms—founded in 1978—it is smaller and has a lower profile than younger rivals such as Carlyle or Blackstone. It has a bench filled with former bosses from the likes of GE, Unilever or Gap, whom it deploys to oversee its companies. These gurus usually chaperone day-to-day managers as chairmen of the board. If that doesn’t work out, they themselves take on the chief executive’s mantle, at least for a while.

CD&R seems to have done a good job of revitalizing businesses. A study by Duff & Phelps, an advisory group, claims that margins at firms taken over by CD&R improve at double the rate of industry peers. A notable early success was IBM’s typewriter-and-printer division, later known as Lexmark, which had an uncertain future when CD&R bought it in 1991. Repositioning it into laser printers more than doubled its value in six years.

More recently CD&R revamped Kinko’s, a chain of copying shops it bought in 1996, by consolidating 127 subsidiaries into a single company and selling it on to FedEx. Alongside Carlyle and Merrill Lynch, it carved out Hertz, a car-hire firm, from Ford in 2005. Having merged it with Dollar Thrifty, a rival, it sold its remaining stake last month, generating an annual return of 33%. Among its more recent purchases are two retailers for which it is planning expansion into Europe: B&M Retail, a British discount retailer now chaired by Sir Terry Leahy, a former Tesco boss turned CD&R adviser; and David’s Bridal, an American purveyor of wedding paraphernalia now chaired by Paul Pressler, once of Gap. Jack Welch, GE’s former chairman, helps find new investments and gauge the progress of existing ones. 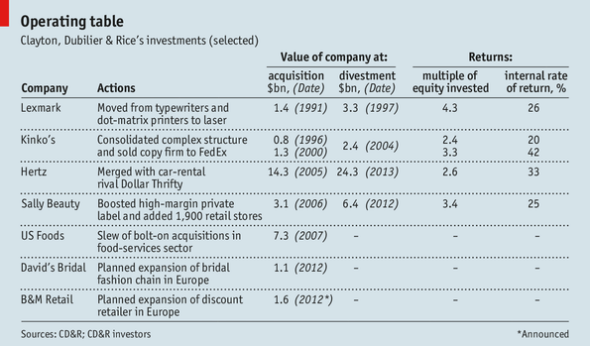 Although rival private-equity firms also surround themselves with former industry bigwigs, they are often salaried guns for hire rather than partners entitled to a slice of the firm’s profits. In-house operations experts play second fiddle to the financiers who structure and execute the takeovers. In contrast, CD&R says their operations aces get between a third and a half of the profits on the entire pool of investments made by the firm.

The focus on operational improvement reflects the firm’s origins. Eugene Clayton and Martin Dubilier were corporate chiefs who first set up shop as a crisis-management firm in 1976. Joe Rice, who stepped down as chairman last year, joined later to help structure the financial end of deals. Even he seemed to doubt the relevance of financial wizardry to the firm’s success. “The buy-out business is not brain surgery,” he once said. “You don’t have to be amazingly adept at financial matters.”

The advantage of the CD&R model, says one investor, is that it can create value no matter the direction of the stockmarket, whereas leverage amplifies market movements (although CD&R does not shy away from using debt). “They haven’t lost any companies in the downturn,” says one backer. “Not a lot of firms can say that.”

It has done well recently, delivering annual returns net of fees of over 20% in the past decade. Its fans like its focus on buy-outs when many of its rivals have branched out into debt, property or hedge funds. Perhaps because it has not sought a stockmarket listing itself, CD&R has forgone the temptation to raise and invest ever-greater sums of money. It is now raising a $5 billion fund, similar to its previous pots. “We couldn’t put twice the money to work,” says Don Gogel, the firm’s boss.

Because of the attention it lavishes on each company, however, CD&R’s bets are relatively concentrated. It has a mere 17 companies in its portfolio, compared with Carlyle’s 210. That means mishaps at a few can dent returns badly, as happened in the late 1990s when performance was lousy. It does not invest outside America or Europe, leaving it exposed to sluggish rich-world economies. Finding conglomerates willing to sell orphan units has been difficult lately, too. And because its turnarounds take more time than traditional buy-outs, it takes longer for the cash it deploys to come back. That dilutes returns.

For a while after the crisis it looked like a paucity of debt financing might force rivals to follow the same operational path. That may no longer be the case: bankers have been falling over themselves recently to finance buy-out deals. Chances are CD&R will remain distinctive.