← The Flowers of Hell
Now That’s a Stretch Goal! →

IKEA in Winnipeg: “We’re Moving on Up!” 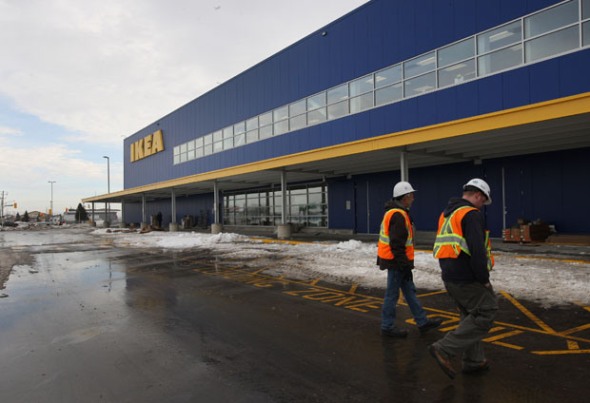 Inter IKEA Systems B.V., the owner of the IKEA concept and IKEA franchisor has 154,000 co-workers in 338 stores with 9.5 million square feet of retail space. It is a successful enterprise by most any standard and is perhaps one of the few retail concepts that has and probably will withstand the onslaught of online retailing and imitators. In large part this is due to a constant series of improvements, increasingly clever designs, and affordable price-points. Not everyone likes to assemble IKEA products nor appreciate the products but with 776 million store visits per annum, IKEA is doing pretty well.

So it was revealing, amusing and telling that the opening of an IKEA store in Winnipeg this week was such an event and point of civic pride. As Joe O’Connor wrote in an article in The National Post:

Chuck Davidson, vice-president of policy at the Winnipeg Chamber of Commerce, sounded giddy, like he was sitting on a winning lottery ticket or had placed money on the Argos to capture the Grey Cup.

“It is like Christmas has come early,” he gushed.

Christmas in this case is a 395,671 square-foot IKEA that opens its doors in Winnipeg Wednesday, a much-ballyhooed and long-awaited retail arrival that has locals clucking with civic pride.

“You have to be a certain size of a city and have a certain amount of retail sales to be able to even qualify for an IKEA — so this is a really big deal for us,” Mr. Davidson says. “When we look at it we see Winnipeg as having entered that upper echelon of cities.

“It’s strange to think a retail outlet could do that.”

IKEA is the Svengali of furniture stores, a curious Swedish creation that has transcended its bounds as seller of stuff to become a seller of something bigger, something bursting with importance, an international badge of civic pride and a passport into an exclusive consumer club for cities and burgs the world over, one that says: We have finally made it.

We, the People of City X, now stand alongside the giants: Madrid and Rome, Shanghai and Istanbul, Tokyo and, yes, Stockholm, as a world-class destination, or at least a world-class business opportunity for IKEA, which does oodles of research before determining where to open a new outlet.

“We only build 20 stores worldwide every year,” Madeleine Lowenborg-Frick, the retailer’s public relations manager, told the Winnipeg Free Press in 2008. “We really do our homework to determine the sustainability and viability of our markets.”

Winnipeg will be home to the 12th IKEA in Canada and the first in Manitoba, marking the beginning of soul-crushing traffic jams along the Sterling Lyon Parkway and the end of seven-hour cross-border pilgrimages to the IKEA in Minneapolis, Minn.

When Walmart comes to a town, locals tend to shudder, seeing it as a threat to mom and pop retail independents, a big-box eyesore and a stake through the heart of the way things used to be. Walmart is Darth Vader. With IKEA, any wariness is overshadowed by unbridled glee.

“When Starbucks first started expanding, getting a Starbucks in your neighbourhood meant that your neighbourhood had arrived or was up and coming,” says Kyle Murray, director of the school of retailing at the Alberta School of Business. “IKEA does that for entire cities, globally.

This old Prairie town is on its way. All those wisecracks from snotty-nosed non-natives about Winter-peg and mosquitoes the size of buses won’t mean a damn thing because IKEA is the Big Time, baby, and the only thing left to wonder is: Will Saskatoon be next?

On the one hand, it is handy to have access to an IKEA that does not require a multi-hour drive. In a world where it is hard to swing a dead cat without hitting a McDonald’s, the deliberately paced expansion of IKEA locations is noteworthy. But on the other hand there is something Canadian — our collective insecurity and need for the affirmation from other countries — about the reaction of a city to having an IKEA open a store. This is also not something singular to Winnipeg. Every Canadian city seems to crave anything that makes it a “world-class city”; Toronto is notable in this regard.

In the meantime, if we are suffering from IKEA withdrawal while in Winnipeg we can now get our fix of hexagon bolts and corrugated cardboard.