← Do You Have the Skills of an Effective Executive?
Was Your Last Taxi Fare $7 Billion? →

Do You Know This Name? Bill Moggridge and Designing Interactions

William Moggridge died on September 10, 2012. He did many interesting things in his professional life: he co-founded IDEO in 1991 when he merged his own firm with those led by David Kelley of Stanford University and Mike Nuttall, from Britain; in 1979 he designed the Compass computer for Grid Systems, a clamshell design that had a 12 by 15 inch footprint — a forerunner of every lap top since.

He wrote a book titled “Design Interactions” that is well-worth reading. Here is the website: http://www.designinginteractions.com/

In her foreword to his book, Gillian Crampton Smith wrote:

David Liddle, who led the team that designed the Star graphical user interface, has talked about three stages in the development of a technology—of photography, for instance, or computers—and how people interact with it.

The first stage is the enthusiast stage. Enthusiasts don’t care if the technology is easy or hard to use because they’re so excited by the technology itself or by what it will do for them. They want it, however difficult it is to use.

The second stage is the professional stage, when those who use the technology are often not those who buy it. Office computers, for example, are usually chosen by a purchasing department, not by their users; the purchasers don’t care about the difficulty because they don’t experience it, and are anyway more interested in factors like price, performance specifications, or after-sales support. At this stage, indeed, some people even have a vested interest in the technology being difficult because they’re selling their ability to use it; the harder it is, the more valuable their skills.

The third stage Liddle identifies is the consumer stage. People now are less interested in the technology in itself than in what it can do for them. They don’t want to spend much time learning how to use it and hate being made to feel stupid. So if it’s hard to use, they won’t buy it. This is the current stage in the use of computer and telecommunications technology: it’s no longer used only by professionals but by a wide range of non-experts, who just want to use it to pursue their everyday lives.

In the past, those who built interactive systems tended to focus on the technology that makes them possible rather than on the interfaces that allow people to use them. But a system isn’t complete without the people who use it. Like it or not, people—irritable, demanding, and often distracted people like ourselves—and their goals are the point of our systems, and we must design for them.

Designing for this new broad spectrum of humanity is more challenging than devising specialist tools for technical professionals. Our users are, justifiably, not prepared to spend time mastering tricky new systems. And they’re not obliged to use our products: If they can’t make them work, they take them back to the store.

I don’t know whether Smith would agree with me, but the observation about the consumer stage is of profound importance in today’s organizations. As people become more used to the ease-of-use provided by products such as the iPhone and iPad, they will become even less inclined to use the clunkier applications and devices used by most large organizations.

Those trying to get employees to use various enterprise-wide applications, like SAP and other similar software, may find that the growing chasm between what we experience at home in terms of easy-to-use technology and what we often encounter at work (often frustrating and designed for enthusiasts or professional technicians) will make the tough task of change management even tougher.

Post script: The laptop Moggridge designed was so striking that director James Cameron used it in the film Aliens as the laptop the Marines use to activate the Remote Sentry Guns. 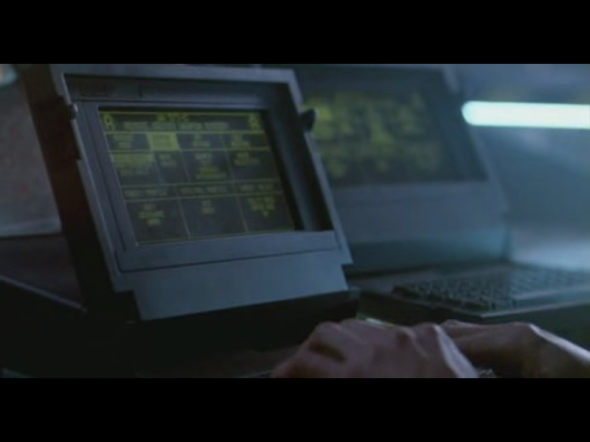