← Sid Lee: Not Your Father’s Strategy Consultant
Analysis in the Service of Aesthetics and Healing →

In this undated time-exposure photo, an LED attached to a self-guided bullet at Sandia National Laboratories shows a bright path during a night field test.

One cannot help but feel amazement, amusement, and astonishment at the ingenuity dedicated to weapons. This is not a new phenomena; arguably, weapons development is perhaps the oldest, most potent engine of innovation. But one example are the pages devoted to maiming weapons and siege engines in Leonardo’s notebooks. 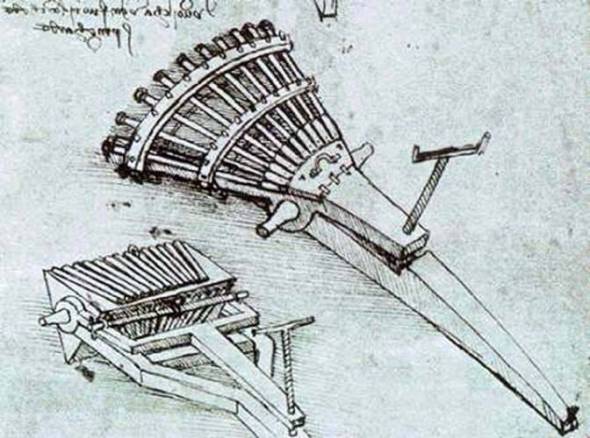 Just make sure you don't infringe on my patent

This latest innovation, suspending for a moment judgment on whether such talent is best spent on firearms, is fascinating. As reported by AP:

A bullet that directs itself like a tiny guided missile and can hit a target more than a mile away has the potential to change the battlefield for soldiers without costing too much, engineers at Sandia National Laboratories said Wednesday.

The bullet can twist and turn to guide itself toward a laser-directed point, all while making up to 30 corrections per second. It’s packed with electronics that control electromagnetic actuators that steer the bullet’s tiny fins.

Sandia technical staff member Red Jones said the .50-calibre bullets are being designed to work with military machine guns, so soldiers could hit their mark faster and with precision.

“Everybody thought it was too difficult to make things small enough. We knew we could deal with that. The other thing was it was going to be too complicated and expensive,” he said. “We came up with an innovative way around that to make it stupid and cheap and still pretty good.”

Jones and his fellow researchers have had initial success testing the design in computer simulations and in field tests of prototypes, built from commercially available parts.

With most of the hard science done, Mr. Jones said the next step is for Sandia to partner with a private company to complete testing of the prototype and bring a guided bullet to the marketplace.

More than $1-million (U.S.) in research and development grants have taken the project this far. The bullet has been in development for three years.

Testing has shown the bullet can reach speeds of 2,400 feet per second. Researchers said they were confident the bullet could reach standard military speeds using customized gunpowder.

Computer simulations showed an unguided bullet under real-world conditions could miss a target more than a half mile away by nearly 10 yards. But according to the patent, a guided bullet would get within eight inches.

Sandia Labs said the design for the 10-centimetre-long bullet includes an optical sensor in the nose to detect a laser beam on a target. The sensor sends information to guidance and control electronics that use an algorithm in an eight-bit central processing unit to command electromagnetic actuators. These actuators steer tiny fins that guide the bullet to the target.

Mr. Jones said there are still some engineering problems to be sorted out that will make the bullet more practical – for example, it will have to be tough enough to be dropped off the back of a truck and still work.

Even more innovation will be needed for the manufacturing process.

Aside from the military, Sandia Labs said potential customers for the bullet could include law enforcement and recreational shooters

Here’s a video of the bullet: http://www.krqe.com/dpp/news/technology/sandia-labs-bullet-doesnt-miss