Japadog: or why it takes a Japanese guy to innovate our humble street meat 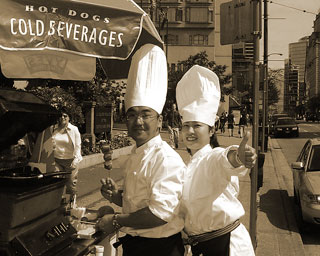 So this Japanese guy comes over to Canada (Vancouver specifically) and wants to do something in terms of street food but is limited by various By-Laws and food regulations to the typical street fare of hot dogs. Undeterred he takes the hot dog and turns the humble wiener into a cult item. He now has four mobile sites going in Vancouver plus a restaurant on Robson and has just opened a restaurant in New York City just east of Astor Place in the Village (http://www.japadog.com/index.html).

Their motto: “Making the World Happy and Alive Through Hotdogs!”

For those of you wondering “how can I take control of my destiny” one only has to learn from Noriki Tamura, a former Tokyo ad salesman, and his wife Misa, who started their first Japadog food cart in Vancouver at the corner of Burrard Street and Smithe within a year of immigrating to Canada in 2005. The English language was a challenge for Tamura, and he and his wife worked that first stand themselves.

They gained a following for their Japanese-inspired hotdogs which include Terimayo, a beef dog with seaweed and wasabi mayo; and Oroshi, a bratwurst with green onions, grated daikon and soy sauce.

“I believe I can do it. I want to expand Japadog [around] the world,” Tamura told The Vancouver Sun’s Mia Stainsby. “When I was university student, I read the books of Richard Branson of Virgin Group. I thought, seriously, I want to be entrepreneur one day.”

As for why I think it took an immigrant to do something entrepreneurial and inventive with a product as basic as a hot dog? I think too many established food companies in Canada (and elsewhere) are either locked into their little boxes of imagination, are unable to get new ideas past the bean-counters, or just don’t get out into the street to see what’s going on.

In large companies, things often have to have some kind of scale to get anyone’s attention and yet the scale of things sometimes creates a conservatism that allows smaller, more nimble competitors to act decisively, quickly and flexibly. In strategic terms, it’s somewhat like a large traditional armored division trying to subdue a guerrilla operation with blunt force; it usually fails. 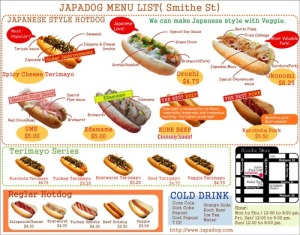 I wonder what it is about hot dogs that makes them so appealing to both patrons and entrepreneurs? Here’s another hot dog entrepreneur: The Hot ‘n Dog.

Here is a Japanese television profile of Japadog: http://youtu.be/x5tbhyqAOC0