In the Prisoner’s Dilemma experiment, two suspected thieves, Alice and Bob are arrested and interrogated separately and in isolation from each other. Both are offered this deal: 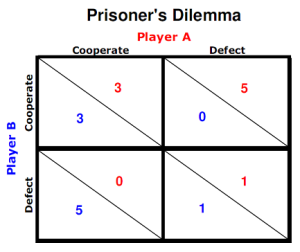 In classical, rational problem solving, the self-interest of each person is maximized if they both decide to snitch because if, by chance, the other person happens not to snitch on you, you go free and get a reward and if the other person does snitch then at least you do not receive the maximum sentence but a reduced one. Staying silent has the possibility of going free but the risk of receiving the maximum sentence.

These probabilities, 100% and 80%, are quite stable across a large number of subjects over the years, which would seem to point to a fairly reliable basis for predicting how people will behave in this experiment. Consequently, when the interrogator says nothing to Alice about whether Bob will or will not snitch, classical decision theory says that assuming there is a 50-50 chance that Bob will say nothing, then the prediction of Alice’s behavior should be the weighted average of the two probabilities for snitching (100% and 80%) with the result that the Alice role player should snitch 90% of the time on average [(100% x 0.5) + (80% x 0.50) = 90%] and stay quiet 10% of the time.

But what happens when this situation is actually conducted is that the person playing Alice decides to keep quite not 10% of the time but 40% of the time. In the context of classical thinking the subject is acting “irrationally” and in a way that classical analysis cannot explain.

But in the current issue of Scientific American (“A New Enlightenment”, November 2012) George Musser describes how the mathematics of quantum logic arrives at a prediction much different than classical probability analysis and that is more aligned to the seemingly irrational outcome of the Dilemma experiment. In essence, in quantum logic the average of 0% and 20% (the two probability modes of staying silent) can be 40% whereas in classical logic it is 10%.

This behavior, favoring the stay silent strategy more than classical logic recommends, is in the simplest of terms equivalent to desiring the outcome where both stay silent and thus go free. Interestingly, when one calculates the optimal strategy using quantum logic, if one assumes what is called “maximal entanglement” then indeed the optimal, mathematical choice is not to both snitch but for both to stay silent. Entanglement is a strange thing indeed; in crude terms it posits that two particles, having become “entangled” in a quantum physics sense, remain instantaneously connected to each other in terms of information/”awareness” of the state of the other particle even if that other particle is at a great distance (e.g. on the other side of the universe).

Thus, when the level of entanglement is set in the quantum equations at the maximum level, the equations predict that the most “rational” strategy is for both players to stay silent whereas classical logic predicts that both should snitch. The fact that people adopt the stay silent tactic far more often than they should based on a classical analysis of the game suggests to many scientists that people’s behavior, far from being “irrational” is perfectly understandable and predictable if one uses quantum logic rather than classical. People are “entangled” like quantum particles when they access the same cultural and social context and expectations and hence are equally and simultaneously guided to the decision to stay silent even though they have not directly communicated with each other.

Most writers on this subject do not advocate that people should learn how to conduct quantum math in order to estimate the benefits of certain strategies as this is quite impractical in ordinary circumstances. But it does point out that we should take not to label behavior or actions as “irrational” simply because it does not correspond to classical logic, but rather, to remain open to the possibility that the outcomes are aligned to a different kind of calculation, one based on quantum physics.

For those curious, below is a representation of the quantum solution space using maximum entanglement. There are two sets of planes, one for Alice and one for Bob. Both curves are maximized in the top right corner which corresponds to both remaining silent.