This May the journal, Royal Society Open Science, published a paper by Matthias Mauch, Robert M. MacCallum, Mark Levy, and Armand M. Leroi titled “The evolution of popular music: USA 1960–2010.” In it they used statistical analysis to understand, numerically, the degree of stylistic changes in popular music during the time period of 1960 to 2010. You can see the full paper on the website: http://rsos.royalsocietypublishing.org/content/2/5/150081

To do this, they collected 30-second clips from over 17,000 songs that appeared in this time period on the Billboard Hot 100. For those interested only in what they found, we’ll start with their conclusions, which, in a nutshell, is that there were three major pop music “revolutions” between 1960 and 2010: the so-called “British Invasion” and the rise of groups such as The Beatles; the “New Wave” synthesizer-based watershed of 1983; the 1991 zenith of the “Rap” revolution. The statistical analysis indicates that of the three pop music revolutions the Rap disruption was the most profound, closely followed by the New Wave surge; the 1964 British Invasion, while certainly a period of change, built upon changes that were already well underway and thus a more gradual process as compared, statistically, to the other two time periods.

Below is the graphic from the paper showing the “heat map” of musical stylistic changes were dark red symbolizes big change and dark blue relatively little stylistic change.

Why is this relevant? First, the approach of the researchers provides an amusing but powerful example of how we can apply analysis on even seemingly subjective topics such as music trends and as a result provide another window on a debate that might otherwise remain stalemated in personal opinion and bias. We can see how we could use this approach for other topics such as trends in other consumer tastes such as in food or clothing. Second, this author believes that for PE professionals wanting to understand more advanced statistical analysis, the tools and concepts used in this paper are a good starting point for a topic list for a program of study. For example, the research utilizes tools such as principal components analysis (PCA), which, among other things, enables the creation of the musical themes taxonomy tree seen below. Statistics generates the 13 distinct musical styles and analytically relates them. That Style 2 (“hip hop/rap/gangsta) is not connected to any other of the styles at a lower level (in the way that styles 3 and 10, for example, are statistically related) further illustrates the degree of stylistic shift rap represented in 1991 on the Hot 100 charts. In the words of the authors:

The evolution of 13 styles, defined by k-means clustering on principal components of topic frequencies. The width of each spindle is proportional to the frequency of that style, normalized to each year. The spindle contours are based on a ±2-year moving average smoother; unsmoothed yearly frequencies are shown as grey horizontal lines. A hierarchical cluster analysis on the k-means centroids grouped our styles into several larger clusters here represented by a tree: an EASY-LISTENING + LOVE-SONG cluster, a COUNTRY + ROCK cluster and SOUL + FUNK + DANCE cluster; the fourth, most divergent, cluster only contains the HIP HOP + RAP-rich style 2. 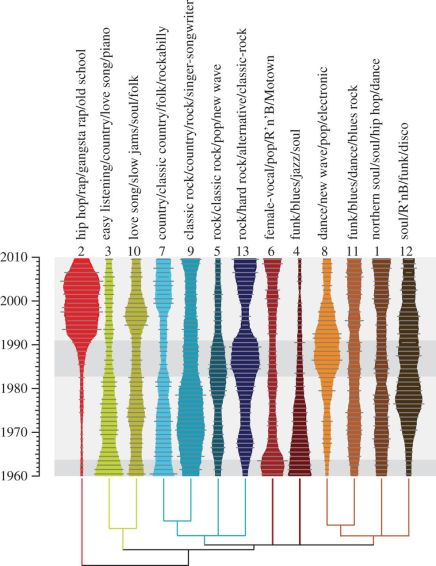 There are certainly limitations to the study, which the authors point out:

…in confining our study to the Hot 100, 1960–2010, we have only sampled a small fraction of the new singles released in the USA; a complete picture would require compiling a database of several million songs, which in itself is a challenge. Given that the Hot 100 is certainly a biased subset of these songs, our conclusions cannot be extended to the population of all releases. Finally, we are interested in extending the temporal range of our sample to at least the 1940s—if only to see whether 1955 was, as many have claimed, the birth date of Rock’n’Roll.

Finally, a science-based excuse to listen to records during stats class.