One of the Best Examples of an Unlean Process? Parking 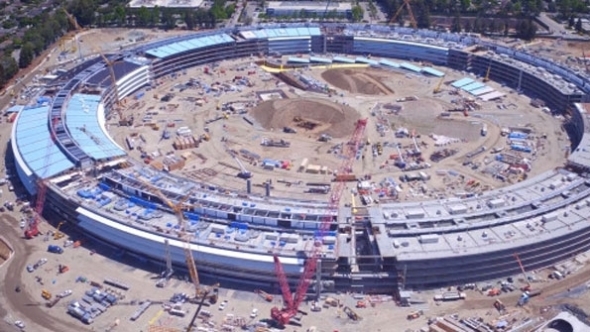 Apple’s new corporate headquarters in California, something of which Steve Jobs took immense interest in before he died believing that it had a shot at being “the best office building in the world,” is certainly impressive on many dimensions. There’s probably one aspect of the building that might have driven Jobs nuts however — the vast allocation of space for the building of hotels for automobiles, otherwise known as “parking spots.”

The main building resembles a flying saucer with a hole in the middle. Through its large, gently curving windows, workers will eventually look out on a wood containing some 7,000 carefully chosen trees. It is as though a race of high-tech beings has landed on a pristine planet.

And then, unfortunately, there’s the car park. For 14,000 workers, Apple is building almost 11,000 parking spaces. Many cars will be tucked under the main building, but most will cram into two enormous garages to the south. Tot up all the parking spaces and the lanes and ramps that will allow cars to reach them, and it is clear that Apple is allocating a vast area to stationary vehicles. In all, the new headquarters will contain 318,000 square metres of offices and laboratories. The car parks will occupy 325,000 square metres. (The Economist, April 8 2017.)

The immense allocation of space and resources for parking cars is a requirement of Cupertino, the city in which the company is based. All over the world huge amounts of urban and suburban space is consumed by the storage of these transportation assets (i.e. “cars”) that stay immobile for 95% of the time or more.

A rule of thumb in lean thinking is that any process that has not been subjected to thorough and continuous improvement is typically at least 95% non value-added. Cars, which add value or fulfill their purpose only when they are transporting us, is an everyday example of un-lean process.

Parking is not only wasteful of land and materials, it also consumes a great deal of time and fuel. In studies of cities with underpriced parking, a large percentage of the cars on the streets at busy times of the day are circling looking for a place to park.

The solutions to unlean processes is sometimes quite simple and straightforward; in other cases difficult because it represents a profound change in how a system or industry operates.

But as with so many things around us, huge amounts of energy is spent trying to fix a symptom — creating an app to improve parking, for example — rather than questioning the existence and root cause of the symptom in the first place and improving the underlying process.