The Wine Hypothesis: The Italian Job

This occasional series is focused on wine and specifically wines that are between $10 and $20 per bottle (in Canadian dollars) and generally available in many locations such as Canada and specifically Ontario.

This post focuses on some good tasting and reasonably priced wines (by Ontario standards, that is) from Italy. 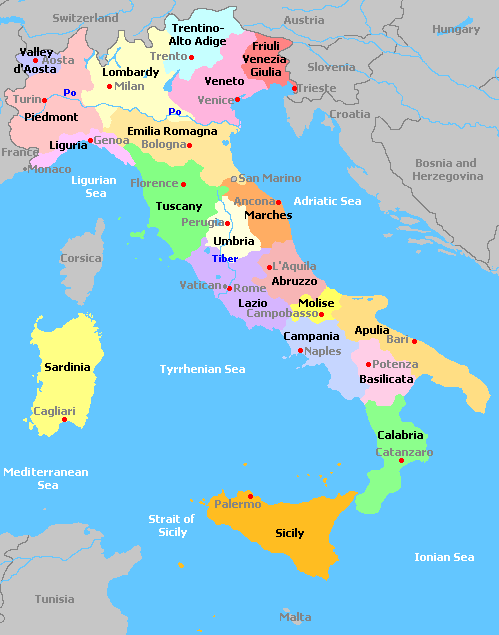 This medium bodied red wine from Illuminati, a family winery, uses the Montepulciano D’Abruzzo varietal. The winery is based in the Abruzzo region which is on the east coast, north-east of Rome about halfway up “the boot.” It is a good pairing with chicken, either grilled or roasted, mushroom-based dishes such as in pizzas or soups, pastas especially those with tomato and/or mushroom-based sauces, porchetta (a style of pork roast from Italy), veal, mushroom risotto, and Italian sausages. It is a very good wine at an incredibly low price.

The Soave region is in the north-eastern Veneto region of Italy. The Classico zone was developed in 1927 and represents about 2,700 acres of superior hillside vineyards. In general, Soave Classico is better than regular Soave and since the price of Soave Classico is relatively low  there’s not much reason to buy plain Soave. In any case, this is a very good, clean and crisp white wine based on the Garganega varietal (minimum 70%) with some Trebbiano di Soave (a.k.a. Verdicchio). It pairs well with chicken salad-type dishes, seafood pastas, risotto, prosciutto, polenta with gorgonzola etc. It’s also just a nice wine to sip on its own.

Zenato is a large producer based in the Vento region. Probably better known for their Amarone wines, they also make good “cheap and cheerful” wines that are a great value. There are a few small producers that specialize on the Soave grape. One is Agostino Vicentini, who makes just 60,000 bottles per year (as compared to the 1.5 million bottles of Zenato) but produces some of the very finest expressions of Soave. Other great Soave wineries, large and small, include Suavia, Pra, Leonildo Pieropan, Daniele Nardello, Monte Tondo, Le Mandolare, Gini, Coffele, Cantina del Castello, and Ca’ Rugate.

One of the common themes in the wines selected is that although they are easy to drink on their own (none are what I would call “big” wines requiring extensive aging or decanting) they do have the acidity that also pairs well with a range of foods. The Barbera grape is one of my favorites in this regard. From the northwestern Piemonte region, it is great with pizza, lasagna, dishes with tomato-based sauces, mushroom risotto, basil pesto, veal, pork, pecorino, anchovies, and other recipes with similar taste profiles. The low-level of tannins in the Barbera style (as contrasted to the Barolo and Barbaresco styles based on the Nebbiolo) makes it a wine that is easy to drink young.

Because there is about 28,000 hectares of the grape grown in Piemonte region, it is possible to find wines ranging from the classic “cheap and cheerful” to intense and more age-worthy styles. According to Jancis Robinson in The Oxford Companion to wine, the better areas for Barbera growth are the hills immediately to the north and south of Alba and Monforte d’Alba and in the region of Asti from Nizza Monferrato north-west towards Vinchio, Castelnuovo Calcea, Agliano, Belveglio, and Rocchetta Tanaro. Because Nizza is one of the warmer areas of the Asti zone, producing very ripe fruit, and also because in Asti the Barbera is often given the best vineyard sites (whereas in Alba the best sites more often grow the Nebbiolo) Barbera from Asti (hence Barbera d’Asti) and Barbera d’Asti Nizza are often the better examples of this wine.

The Superiore designation refers to the requirement for at least one year of aging, of which 6 months is in oak or chestnut barrels.

This particular wine, by Michele Chiarlo, is a classic example of a fine Barbera d’Asti by a solid producer. If you run across their Barbera d’Asti Superiore Nizza La Court it is well worth buying if you are able as this wine takes the Barbera grape to a higher level. For everyday drinking, however, the Cipressi della Court Barbera D’Asti Superiore is perfect.

Because varietals such as Pinot Grigio are so well-known by the general public, less attention is paid to other Italian white wines. This wine is based on Greco Bianco and this particular dry white is from the Campania region, specifically (hence the name) the village of Tufo, which located due north of Salerno about 45 kilometers inland and northeast of Naples. What is interesting about this wine is that it has a bit more body and aromatics like a Viogner or a rich Sauvignon Blanc from the Bordeaux area; in other words, dry but with a pleasant residual minerality.

Like some other wines – Chablis, Merlot – Chianti a few years ago became associated with cheap, poorly made wine. Today, the Chianti Classico wines are very good values and like the Barbera have that nice combination of acidity that goes well with meals and the fruit that makes them easy to drink on their own. Like many varietals, the Sangiovese grape that goes into Chianti wines is grown in huge quantities. Consequently, the Classico designation was created to create a sub-brand that would denote higher quality. In this case, limitations of yields that helps improve grape quality, specifications on the minimum amount of the Sangiovese (at least 75%) and limits on other grapes such as a 10% maximum for Canaiolo and 15% for all others such as Merlot, Syrah, and Cabernet Sauvignon.

There are many good value Chianti Classico wines on the market and  some transcendent wines that rival the best wines from any region of the world (such as those produced by Castello di Ama, Marchesi Antinori, Castello di Fonterutoli, Tenuta Fontodi, Isole e Olena, and Castello dei Rampolla). This wine is by the large but excellent Antinori. For under $20 the Peppoli is a solid Chianti Classico to drink right away. At a $43 their Chianti Classico Badia a Passignano Riserva represents the Sangiovese grape in a more profound manner with good aging potential.

Modern Orvieto is based on 40 to 60% Trebbiano Toscano with 15 to 25% Verdello and comes from the Umbria region located between Tuscany and Rome. A dry white wine, it pairs well with antipasto, lightly poached fish, lighter styles of pizza and pasta, calamari, as well as prosciutto especially when served with melon.