Last week Marketwire, a food trade journal, reported on the top food stories of 2011 in the U.S. as determined by a survey  commissioned by Hunter Public Relations. Hunter PR enlisted Wakefield, an independent market research firm, to survey 1,000 Americans ages 18 years and older via an email invitation and online survey. For this study, the chances are 95 in 100 that the survey result does not vary by more than plus or minus 3.1 percentage points from the result that would be obtained if interviews had been conducted with the entire population represented by the sample.

Food safety tops the list of an annual survey asking Americans to choose the most significant food story of 2011. Even in a year when global food prices hit record highs and both restaurant menus and retail food labels got a new look, the safety of the American food supply dominated the headlines and consumers took notice.

The following were the top three food-related stories of 2011:

To date, 29 people have died, and another 133 were made ill from tainted cantaloupe in 2011. Traced to bacteria growing on packing equipment at Colorado’s Jensen Farms, the incident is already the second largest listeria outbreak in U.S. history.

For the second year in a row, First Lady Michelle Obama was part of one of the top food stories of the year. Together with the USDA, she revealed MyPlate, the new dietary guidelines campaign, replacing the 20-year-old food pyramid.

The number three spot finds its home at the intersection of food and finance: global food prices skyrocketed in 2011, putting pressure on the restaurant, travel and hotel industries. To avoid passing costs to consumers, companies are scrambling to renegotiate contracts, find cheaper suppliers and reconfigure menus. 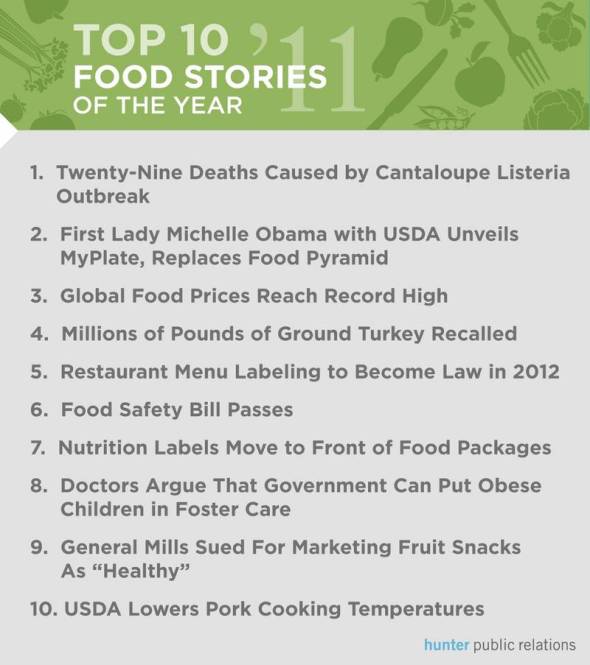 The survey also revealed how consumer behavior was impacted by these stories and how these stories will affect Americans in the coming year.