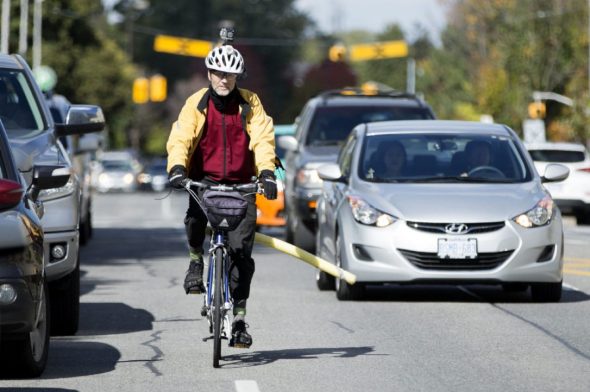 xraydelta spotted this example of improvement through the use of a simple visual management signal in The Toronto Star. In this case a cyclist has mounted a foam tube (one of those “noodles” kids use in pools) to the back of his bike.

Visual management is the use of non-text visuals to provide information. The best visual management tactics do not rely on logos or anything that requires special knowledge — they operate on an intuitive level. An example of visual management (and mistake proofing) are those heavy bars suspended over garage entrances to show the maximum height of vehicles that can enter safely.

Here’s the story as reported in The Toronto Star:

Cars barreling by him. SUVs passing within inches of his bike’s handlebars. Drivers jamming on the brakes and leaping from their vehicles to confront him. Daily commutes used to be tough for Warren Huska, who cycles 18 kilometres from his home near the Beaches to his office in North York almost every day.

“People get really insulated inside a vehicle,” Huska said. “They don’t really know where the edges of their vehicle are.”

But, for the past year, drivers have given Huska a wider berth. Now, when he mounts his trusty two-wheeled steed, Huska is protected by a pool noodle. Strapped to his bike’s frame with bungee cords, the floppy foam cylinder is a reminder to drivers not to get too close.

“The edge of the noodle (helps them) gauge space instead of them trying to judge where my elbow was,” said Huska.

Huska took up the noodle in mid-2015, when Ontario enacted new laws requiring drivers to leave one-metre’s distance when passing cyclists on the road. The change he noticed was “almost magical,” Huska said.

“Suddenly all the cars are changing lanes to go around me.”

Huska estimated he has biked 8,000 km, in all seasons, with his noodle in tow. It’s an added measure of safety in a city where cycling in traffic can be a dangerous undertaking. Toronto police say there were 864 collisions between cars and bikes from Jan. 1 to Sept. 30 alone.

Huska said drivers have reeled down their car windows to congratulate him on the usefulness of the noodle.

But, so far, he has heard of only one other cyclist rolling with their own noodle. That might have something to do with the noodle’s coolness, or lack thereof.