← A Cartographic Analysis of the 2016 U.S. Presidential Election
Requiem for the American Dream →

A personal favorite bit on Saturday Night Live is Dan Aykroyd’s “Bass-o-matic” sketch, a send-up of the old K-Tel and Ronco TV ads.

As a wine drinker I had a bit of a flashback to the Super Bass-o-matic ’76 when I read about a new wine production device called Vinfusion developed by Cambridge Consultants. 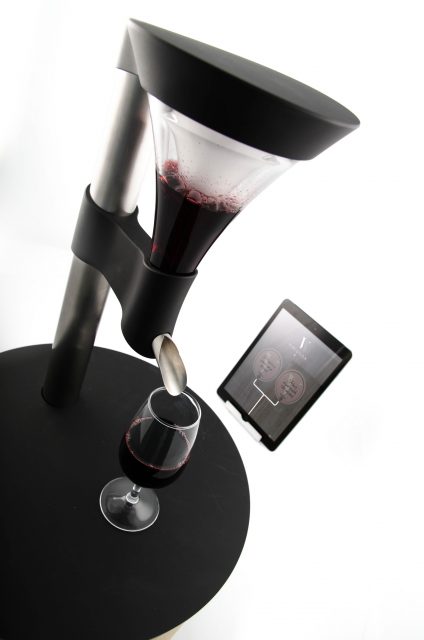 According to The Drinks Business the Cambridge technology company has developed a machine that allows non-specialist wine drinkers to blend a wine according to their personal taste.

Launched by Cambridge Consultants this week, the Vinfusion device uses non-technical wine descriptions and combinations of four ‘base wines’ to enable non-specialists to create their own bespoke wine blends ‘on the fly’ – “demystifying the huge and often confusing choice of wine available to consumers”, as the company says.

Before developing the Vinfusion device, a team at Cambridge Consultants led by Sajith Wimalaratne, the firm’s head of food and beverage development, undertook a study of the wines people buy in pubs, bars and restaurants.

The study revealed that most of the 138 people polled tended to order the same wine whenever they go out and rarely do they try wines with which they are unfamiliar.

Furthermore, many of the drinkers questioned for the survey were reluctant to ask for advice about different wines – and as a result 70% of them were regularly disappointed by the wines they ordered.

In order to develop a machine that was effective in blending wine for non-specialist wine drinkers, Wimalaratne and his colleagues used a selection of the most common adjectives used by the participants in the survey – “light”, “full bodied”, “dry”, “mellow”, “sweet”, “sharp” and “fiery”.

Focusing on red wines initially, they then analysed 20 wines to find out which, both individually and as a blend, produced the flavours and aromas participants wanted, matching these to the popular descriptors.

From these 20 wines the team picked four base wines – a Pinot Noir and a Merlot from Chile, a Shiraz from Australia and a Muscat from France – representing an approximation of the full spectrum of flavours novice wine drinkers could expect from a wine.

To create a new wine using the Vinfusion machine, the user manipulates three sliders on a touch screen. One moves between “light” and “full-bodied”, another from “soft”, via “mellow”, to “fiery”. The third moves between “sweet” and “dry”.

Crucially, Wimalaratne believed that by avoiding the descriptors and terminology favoured by specialists in wine, the device opened up the possibility of blending a wine to the specific taste of a non-specialist.

Once the user makes his or her selection, the device then mixes the wine from tanks containing each of the four ‘primary’ wines. The device adds air bubbles ensure an effective blending of the base wines.

“Blending wines to achieve a certain flavour or aroma has been around for centuries and this is at the heart of Vinfusion,” Wimalaratne said.

“One of the challenges is understanding the complex relationship between the taste and the proportions of the blended wines. So we surveyed how consumers choose wines and ran taste tests to see how they perceived and described the flavours.”

Wimalaratne envisages that a likely commercial application would be in a bar or restaurant where it could help people to customise their wine according to their own personal taste.

“Part of the application which drives the system also allows the user to pick a wine from recommendations that go with a menu – so acting as a kind of robot sommelier, if you like,” he said.

“Another application might be in a wine shop where it could help the customers to understand better what all of the vast array of wines on offer might taste like and which ones might appeal to a particular consumers taste. From the retailer’s point of view, the system can also provide tremendous insight into what wines people actually want to drink.”

Concerning ways in which the device might be developed, Wimalaratne said there were several options, including adding other elements of wine flavour, such as oak of the flavours associated with barrel ageing. Another option, he said, would be to focus on the retail application of the device.

“We already gather a lot of data to do with which blends are most popular and exactly how much of each wine is used, but we could also expand this with software which would compile data geographically across many different machines,” he said.

“Alternatively, we’ve also considered how we might make the user experience even easier – like allowing the users to download their favourite blends to their smartphone or even link them to a contactless credit card.

“We have developed Vinfusion as a concept system to bring alive our skills in applied science and novel dispense systems. We’re keen to talk to companies who would be interested in taking forward this specific concept or who are interested in our capabilities that this demo highlights.”

Cambridge Consultants has also worked on a beer hop infusion device which allows users to blend hops into beer ‘on the fly’ in a similar way to the wine-blending Vinfusion device.

Noting that one of the common themes across the beer industry was “personalisation”, Wimalaratne said that the company’s Hoppier device allowed on-the-fly infusion of fresh hops while a pint was being poured.