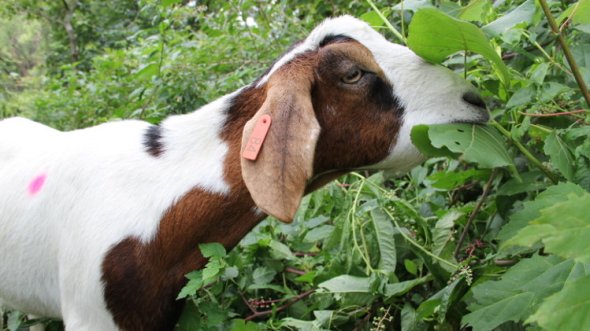 Proving that we can improve any process if we think laterally, there is this amusing but clever example. Goats, apparently, are quite effective at chowing-down on weeds and other things that we often manage with chemicals or more expensive manual labor. An example are goats used at Congressional Cemetery in Washington D.C. to control poison ivy and other invasive species that were crowding out trees.

For the next week, the 70 goats _ known as “eco-goats” _ will eat the vines, poison ivy, dense vegetation and anything they can reach to clean up a densely vegetated parcel on the cemetery grounds.

“We’re trying to prevent invasive species from eating the trees and having them fall on the historic headstones,” said Paul Williams, the president of the Association for the Preservation of Historic Congressional Cemetery. “We don’t want to utilize chemicals, due to our riverside location and because of our membership-only, off-leash dog-walking program.”

The floppy-eared brown and white goats, including Yoda, Buckaroo and Mimi, were camera-shy environmental pioneers at first, refusing to leave their trailer, emerging briefly and then running back in to avoid news crews. After the cemetery and humane society officials moved the media herd, the goats ran into the 1.6-acre enclosed area and started doing what they do best: chomping everything green and leafy in sight. The sight of them chewing vines and their fairly constant bleating delighted about a half-dozen children.

“It’s actually an ancient custom,” said Williams, who’s trying to be innovative and to bring new life and activities to the cemetery. “I kind of hope it opens people’s minds to alternatives.” Hiring the 70 goats is a thrifty move, too. They’re capable of reaching vines as high as 7 feet, and the bill for their trouble will be $4,000 for six days of work, which Williams said worked out to a bargain.

“This is an exciting opportunity for us to demonstrate the positive aspects of using goats to help reduce and control problem vegetation,” said Brian Knox, the owner of Eco-Goats in Annapolis. The city of Paris [also] began using sheep this past spring as eco-mowers to keep the lawn trim outside the French capital’s municipal archives.