← Fat Doesn’t Make You Fat: Good and Bad Root Cause Problem Solving
The Signal and the Noise: Bayes Rules! →

Don’t Make It, Print It

3D printing, also known as additive manufacturing, whereby objects are created from a digital file by depositing layer upon layer of a substance, is now moving from isolated experiments and novelty to full-scale application; a new era of highly advanced manufacturing unrecognizable to most, is upon us and Black Belts, engineers, designers, product developers and most importantly business leaders need to get their minds around this quickly in order to seize upon the opportunities this creates.

Traditional supply chain thinking is rooted in the idea that you make something in one place and have to figure out how to orchestrate the timing and quantity of stuff flowing into the plant and then out to the final consumer. Digital manufacturing, at its extreme, puts micro factories in many places and allows the end-user to make what they need, when they need it. More than that, the digital nature of the process will enable customization of a kind never before practical.

The future belongs to the people who can develop better and better “printers”, different kinds of substances these printers can use to create things, and the designers who, on their computers, create designs that people want and download from a 3D manufacturing equivalent of iTunes (who knows, it might even be iTunes).

The rate of change in this area is gathering pace. For example, even as the U.S. Congress wrestles over gun control laws, people are figuring out ways to use 3D printers to print guns and gun parts. The Economist reported:

Last autumn Cody Wilson, a law student at the University of Texas, leased a Stratasys 3D printer. He wanted to print a gun, and more—he and the group he founded, Defense Distributed, wanted to develop blueprints for 3D printing of guns and gun parts, and distribute those blueprints online. Mr Wilson’s motives are overtly political; he wants to “[expand] a free sphere of action…in contradistinction to a planned regulatory scheme…The file is the message. Anyone can have it, anyone can print it, anyone can use it.” Stratasys was not amused. Mr Wilson says they reclaimed their printer before he had even set it up.

Undeterred, Defense Distributed raised enough money first to lease time on 3D printers around Austin, Texas, and then to buy two of their own. Earlier this month they successfully tested a printed, plastic 30-round magazine for an AR-15, one of the most popular rifles in America. They called their magazine “Cuomo”, after New York’s governor, who championed legislation banning magazines that hold more than seven rounds. Others have successfully printed stocks, grips and triggers, though not the chamber or the barrel of a weapon. That is much harder; but all this tinkering makes many people nervous.

Some of that fear may be overblown. Making a gun for personal use is usually not illegal, and home-made guns are nothing new. Ginger Colburn, a spokeswoman for the Bureau of Alcohol, Tobacco and Firearms (ATF), says her agency has seen guns made from “pens, books, belts, clubs. You name it, people have turned it into firearms.” And it may lead to bad law. Michael Weinberg, a staff lawyer at Public Knowledge, an open-source advocacy group, fears clumsy regulation of 3D printing, rather than of the weapons themselves.

To that end, Steve Israel, a Democratic congressman from Long Island, plans to introduce legislation renewing and expanding the Undetectable Firearms Act. That bill outlaws guns undetectable to common X-ray machines. Mr Israel wants to make plastic magazines illegal too. Easier said than done. Banning plastic gun parts when none existed was one thing. Enforcing a ban when anyone with an internet connection and a 3D printer can make them is entirely another.

The article mentions Stratasys (http://www.stratasys.com/). This one of several companies driving the 3D printing revolution. Their Idea Series 3D printers are not designed with just big companies in mind, but individuals. The Mojo unit in this line sells for $9,900; it’s about the size of a large microwave oven. 3D printing will help enable, for those with the vision, truly lean end-to-end supply chains. It will also put many traditional companies under pressure.

Even those industries that currently (I say currently because who knows what will happen even just 5 years from now) are not under threat of 3D printing, need to think of ways to push more of what they do into the online, digital realm as well as to think about many smaller production centers that are closer to customers and therefore enable shorter supply chains (with less finished goods in storage and in transit) that are more responsive local demand levels and tastes. 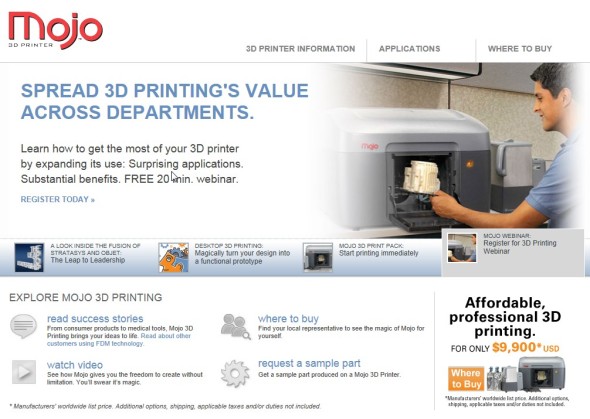