← From Greatest to Greater-est
Are You Useless at Fractions? → 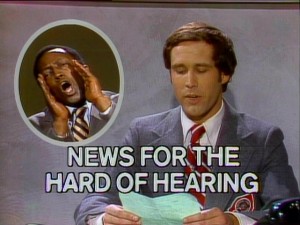 What’s that you said?

This came off the wire.

Reuters – Comforting news for anyone over the age of 35, scientists have worked out that modern pop music really is louder and does all sound the same.

Researchers in Spain used a huge archive known as the Million Song Dataset, which breaks down audio and lyrical content into data that can be crunched, to study pop songs from 1955 to 2010.

A team led by artificial intelligence specialist Joan Serra at the Spanish National Research Council ran music from the last 50 years through some complex algorithms and found that pop songs have become intrinsically louder and more bland in terms of the chords, melodies and types of sound used.

“We found evidence of a progressive homogenization of the musical discourse,” Serra told Reuters. “In particular, we obtained numerical indicators that the diversity of transitions between note combinations – roughly speaking chords plus melodies – has consistently diminished in the last 50 years.”

They also found the so-called timbre palette has become poorer. The same note played at the same volume on, say, a piano and a guitar is said to have a different timbre, so the researchers found modern pop has a more limited variety of sounds.

Intrinsic loudness is the volume baked into a song when it is recorded, which can make it sound louder than others even at the same volume setting on an amplifier.

The music industry has long been accused of ramping up the volume at which songs are recorded in a ‘loudness war’ but Serra says this is the first time it has been properly measured using a large database.

The study, which appears in the journal Scientific Reports, offers a handy recipe for musicians in a creative drought.

So how do the algorithms work? According to a post by Slate’s J. Bryan Lowder:

The analysts ran 464,411 recordings from all genres of popular music from the period of 1955-2010 through a complex set of algorithms to analyze three metrics: harmonic complexity, timbral diversity, and loudness. The results indicated that, on the whole, popular music over the past half-century has become blander and louder than it used to be.

To understand these findings, it’s worth briefly delving into the terms in question. Most people are familiar with the idea that popular songs are constructed chiefly of a melody (usually the lead vocal line or tune) and supporting harmonies called chords (rhythm is the other chief component, but more on that later). The study found that, since the ‘50s, there has been a decrease not only in the diversity of chords in a given song, but also in the number of novel transitions, or musical pathways, between them. In other words, while it’s true that pop songs have always been far more limited in their harmonic vocabularies than, say, a classical symphony (see this very funny exploration of the ubiquitous four-chord sequence “I-V-vi-IV” for an example), past decades saw more inventive ways of linking their harmonies together than we hear now. It’s the difference between Carly Rae Jepsen’s “Call Me Maybe” (2012), which contains four simple chords presented one after another almost as blocks, and Alex North’s “Unchained Melody” (1955), which, though also relatively harmonically simple (it employs about six or seven chords, depending on the version), transitions smoothly from chord to chord due to more subtle orchestration.

The research group also discovered that “timbres”—or the distinct “textures” produced by different instruments playing the same note—have gotten more homogenous over time. To be clear, this is not to say that musicians are using fewer or different instruments now than before; rather, since 1955, pop has tended to use a smaller and more homogenous palette of “tone colors” at a given time.

The final finding—that music recordings have grown louder and louder over time—will come as no surprise to those who’ve been following the so-called “Loudness Wars, ” but this seems to represent the first data-driven proof of the phenomenon. As producers compete for the attention of radio listeners to make their artist’s recordings a hit, they’ve been gradually ratcheting up the inherent volume of the tracks at the cost of sound quality and dynamic richness. (You can hear what this sounds like on YouTube.)

So all this study’s conclusions seem plausible, but does it really mean that our pop is dumber than before? To answer that, it’s important to also ask what the researchers didn’t study. For instance, though “Call Me Maybe” is made from a rather blunt and familiar set of four chords, the infectiousness of the song, at least for this listener, is located in both the playful rhythmic friction between the vocals and instruments—rhythm, crucially, was not taken into account in this study—as well as the cappuccino-cozy, almost country quality of Jepsen’s voice. (Note how it glides and sometimes endearingly stumbles over her love-drunk lyrics.)

Indeed, so much musical interest in this hip-pop and dance-pop moment of recent years derives from the pervasive four-on-the-floor dance beat—and, crucially, well-crafted rhythmic dissensions from it. (“Unchained Melody,” while a gorgeous song, isn’t known for its beat.) As tempting as it may be to try to decode the “musical discourse,” as these researchers called it, there are certain aspects of music—ineffable and otherwise—that will always elude your dataset.

Below are illustrations from the original report: