← An Arts and Science Approach to Business – Part 1
Who’s Learning to Write Computer Code? Not Who You Might Think →

Wave of the Future or a Fad?

Well.ca (http://well.ca/) an online health and beauty retailer just launched their version of a concept we saw earlier in Seoul South Korea for Tesco. In an earlier post, Cool Retail Tesco, we saw how Tesco Home Plus was trying to go beyond static signage to virtual store shelves.

The Well.ca set-up is in the underground concourse (Toronto’s PATH system) near the Royal Bank Plaza.  It features images of Pampers diapers and Tide detergent, rather than the products themselves. Using a smartphone app, shoppers place their orders by scanning quick response codes – QR codes, for short – on pictures of products, which are then shipped, the next day to customers free of charge.

In an outline in The Globe and Mail, Marina Strauss wrote:

Well.ca’s store of the future is the latest iteration of high-tech retail, aimed at reinventing shopping through the use of mobile devices and e-commerce to shave costs and draw customers. Earlier this year, the Bay launched a virtual store greeter named Anna, welcoming passers-by to shop in its new virtual gift store where they can purchase a product by touching the shelf it’s sitting on with a QR code-embedded card.

Retailers such as clothier Gap Inc. and office supplies specialist Staples Inc. staff their warehouses with thousands of robots, while chains move their customers through self-checkouts, sometimes handing them a scanner to do the work themselves, cutting labour expenses. Retailers are betting that investing in technology such as this can help them operate more efficiently and bolster business.

Mobile connectivity is making Internet access ubiquitous. In 2010, 43 per cent of mobiles sold were smartphones and, in 2015, the number is expected to jump to 71 per cent, according to his figures. By then, companies such as Dominos Pizza in Australia are forecasting that mobile sales will make up 25 per cent of all revenue.

Still, while mobile retail is about to boom, the jury is still out on the use of QR codes, said Kaan Yigit, president of Solutions Research Group. Only 20 per cent of Canadian smartphone owners use them; those people are generally male and over half the users are under 30, he said.

For the virtual-store idea to work, shoppers first need to install the app and then use a QR code. “Unless what they are selling is highly exclusive or unique, there are just easier ways to buy the same thing – either at brick and mortar stores or online.”

Even so, he gave Well.ca high marks for grabbing attention. “Definitely they will have some curious consumer sampling.”

As a result of the initiative, Well.ca was on its way to selling more Tide detergent on Monday than it sold in the entire month of March, he said.

With overall sales growing in the double digits monthly, Well.ca would like to set up the virtual store in other cities across Canada. With more than 50,000 products – 150 of them at the mobile store – the e-commerce site is now branching out into food and pet products. 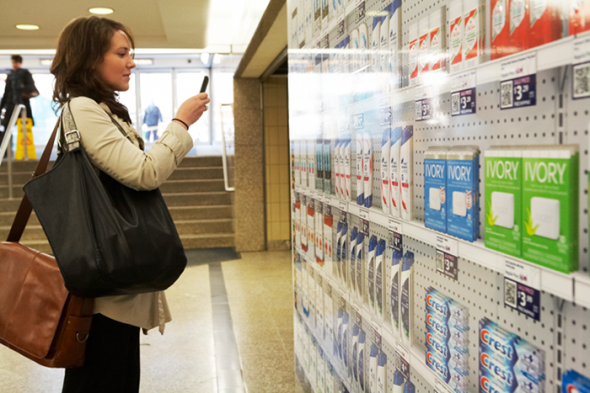