What is the Profit per Employee at Your Company?

Depending on your answer to this question, you might feel better or worse about the performance of your for-profit company. Apple leads technology firms with a 2011 profit-per-employee of $419,000. Google is next at $336,000 followed by Microsoft at $245,000. Lest one think that this an arithmetic trick, no less a figure than McKinsey’s Lowell Bryan wrote back in the February 2007 edition of the McKinsey Quarterly:

Let’s get right to the point: companies focus far too much on measuring returns on invested capital (ROIC) rather than on measuring the contributions made by their talented people. The vast majority of companies still gauge their performance using systems that measure internal financial results—systems based on metrics that don’t take sufficient notice of the real engines of wealth creation today: the knowledge, relationships, reputations, and other intangibles created by talented people and represented by investments in such activities as R&D, marketing, and training.

Increasingly, companies create wealth by converting these “raw” intangibles into the institutional skills, patents, brands, software, customer bases, intellectual capital, and networks that raise profit per employee and ROIC. These intangibles are true capital, in the sense of delivering cash returns, even though the sources of those returns are intangible. Indeed, the most valuable capital that companies possess today is precisely intangible rather than financial.1 Companies should redesign their financial-performance metrics for this new age.

Despite the evidence that intangibles are now the true source of corporate wealth, companies tightly control discretionary spending on them. Advertising, R&D, new-product development, training, knowledge creation, software projects, and so forth are almost always expensed on a “What can we afford?” basis. Why?

One reason is that accounting for intangibles is difficult. In particular, each intangible’s specific contribution is hard to assess; how, for example, do you value a brand? Intangibles are embedded in the value chain of production, so it generally isn’t clear which intangibles are the sources of profits—or what specific balance of intangible and tangible assets should get the credit (or blame) for results.

The bigger problem is that most companies gear the way they measure their financial performance to the needs of an earlier industrial age, when capital enjoyed pride of place in the minds of strategists and investors. Companies fill their annual reports with information about how they use capital but fail to reflect sufficiently on their use of the “thinking-intensive” people who increasingly drive wealth creation in today’s digital economy.

To boost the potential for wealth creation, strategically minded executives must embrace a radical idea: changing financial-performance metrics to focus on returns on talent rather than returns on capital alone. This shift in perspective would have far-reaching implications—for measuring performance, for evaluating executives, even for the way analysts measure corporate value. Only if executives begin to look at performance in this new way will they change internal measurements of performance and thus motivate managers to make better economic decisions, particularly about spending on intangibles.

It is hardly a surprise that growth in profits and market caps should be closely correlated and that a fivefold increase in profits should lead to a similar increase in market caps. But these results do suggest that companies need to take a new approach to measuring financial performance—an approach based on maximizing returns on people. Total profit, after all, is the product of profit per employee and the total number of employees, so maximizing both expressions increases total profit, which drives market capitalization.

Concentrating on this formula (as opposed to returns on capital) offers several advantages. For one, unlike ROIC, profit per employee is a good proxy for earnings on intangibles, partly because the number of people a company employs is easy to obtain. Capital, perhaps surprisingly, is subject to the vagaries of accounting definitions and such corporate-finance decisions as debt-to-equity ratios, dividend policies, and liquidity preferences. As we’ve noted, and as any executive will testify, talent—not capital—is usually the scarcer resource.

Clearly, then, a new set of metrics could help companies gauge their performance more effectively. Executives should home in, first, on how much profit per employee a company generates. They should make the number of employees a key factor in strategic thinking. And they should keep a clear eye on ROIC, but more as a way of ensuring that the company earns more than the cost of that capital than as an aspiration in its own right. With these metrics, the company can set its goals for the return on intangibles (that is, profit per employee) and growth (the number of employees), as well as its return on capital, which is largely a sanity check. Together, these three metrics squarely highlight—and drive—market caps. 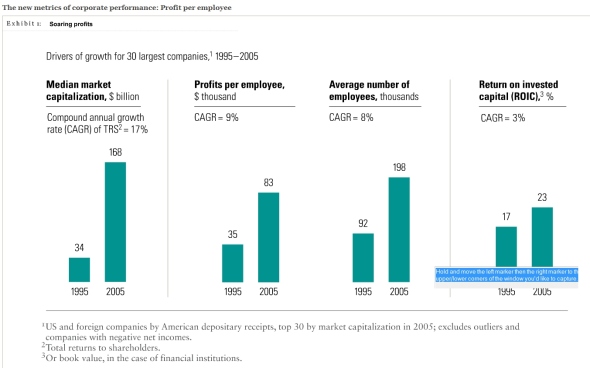 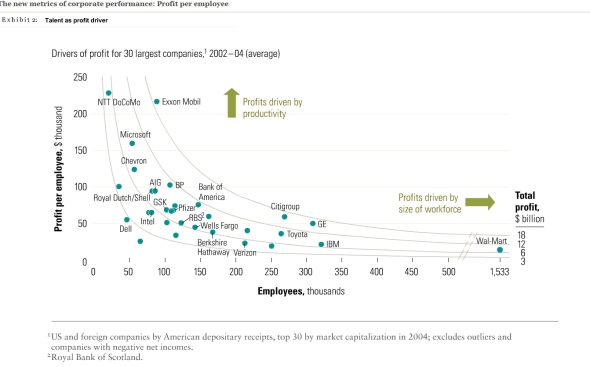 Bryan raises crucial questions about whether many organizations are using an incomplete set of performance metrics with the result that things they should do are not done because they are assessed using the wrong yardsticks.

The other technology profit-per-employee leaders are: