Ghost Bird: The Unintended Consequences of the Ivory-Billed Woodpecker 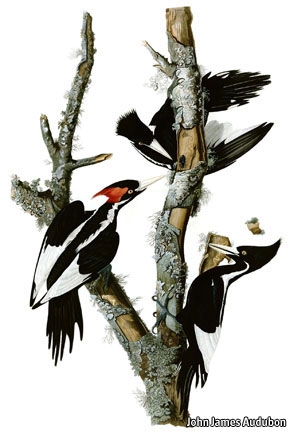 This October 2011 article from the Economist summarizes the decades-old search for any sign of the legendary ivory-billed woodpecker. I saw a few months ago a fascinating documentary about this bird titled “Ghost Bird”. The film’s website is: http://ghostbirdmovie.com/. The other thing that caught my eye are the potential unintended consequences tha article describes towards the end of the Economist piece.

When Elvis Presley died in 1977, a lot of people continued to believe he remained alive but in hiding. The world of conservation has a similar phenomenon. The ivory-billed woodpecker was once found across the swampy forests of the south-eastern states. But as the big woods of the Mississippi Delta were chopped down, the woodpecker—with its distinctive tooting call and double knock—was slowly exterminated. Now, as with Elvis, sightings of the bird are hotly debated.

The last undisputed report of an ivory-billed woodpecker in continental North America was in Louisiana in 1944. Since then, accounts of the bird have trickled in. Then in 2004 a kayaker caught a glimpse of a majestic woodpecker in a wildlife refuge in Arkansas. That report, and a number of others, triggered a five-year, multimillion-dollar bird hunt across eight states. Many millions have been spent acquiring the sort of forest that might be suitable for the bird—if it were to be found.

That search came to nothing, so now scientists are applying statistics to the problem. One team, lead by Nicholas Gotelli at the University of Vermont, studied the historical decline in specimens taken by museums and private collectors. They also looked at areas where bird life has been exhaustively sampled. Dr Gotelli reckons the odds of finding the ivory-billed woodpecker alive are less than 1 in 15,625. Another group, led by Andrew Solow of Woods Hole Oceanographic Institution, used a different statistical approach, but also concluded that the bird is likely to be extinct.

John Fitzpatrick, director of the Cornell Laboratory of Ornithology and one of the leading figures in the search for the woodpecker, agrees there is a high probability that the bird is gone. But he says that, faced with the evidence of sightings, he felt compelled to search for the bird. He cautions that other birds have been assumed to be extinct, only to be rediscovered later.

The rush to protect a possibly non-existent bird’s habitat may seem odd: but, if discovered, the creature would be protected by the Endangered Species Act. One perverse consequence of this act, well documented in the case of the red-cockaded woodpecker, is that landowners rush to destroy suitable habitat before their land gets hit with a protection order. News last month that the government is planning to review the status of hundreds of possibly-endangered species has left conservationists worried. Some fear the new protections might push species such as the Texas kangaroo rat or the golden-winged warbler down the same road to extinction as the ivory-billed woodpecker.