Ultra Performance: The Race Across the West 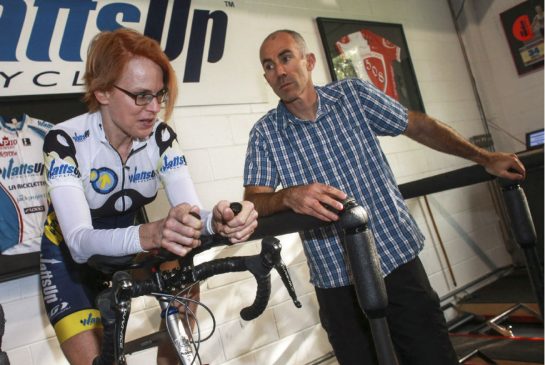 xray-delta is about achieving breakthrough performance and so it is fitting to shine a spotlight on the bicycle race called the Race Across the West. Their website describes it as

…a Race of Truth
Unlike other well-known road races, like the Tour de France, RAW is not a stage race. RAW is a single stage. Once the clock starts in Oceanside, it doesn’t stop until the racer reaches the finish line in Durango. RAW is the second longest endurance cycling race in the United States. The race is essentially a time trial – a race against the clock, sometimes referred to as the race of truth. Unlike the Tour de France, solo racers are not allowed to draft or take shelter from the wind. Teams may have as many team members on the road as they wish.

The heart of the race is the Solo division. That is where the ultimate challenge lies. However, there are team categories of 2-Person and 4-Person Teams.

The route is about 860 miles, passing through 4 states and climbing over 40,000 feet. Teams typically cover the distance in 2+ days, averaging 350 to over 500 miles per day. Solo racers finish in 3 to 4 days, averaging 250 to 350 miles per day. Teams generally use a relay format and race 24 hours a day. Solo racers have the challenge of balancing a few hours of sleep each night against race deadlines.

A Torontonian, Vaune Davis, is an entrant this year and was profiled in the Toronto Star:

Vaune Davis is about to embark on a 1,400-kilometre bike race across four U.S. states, with more than 40,000 feet of mountains to climb. The Toronto woman will be eating from a bowl Velcroed to her handlebars and essentially ride day and night for up to 92 hours.

That’s the equivalent of getting on her bike in the GTA, pointing east and not getting off until Prince Edward Island while climbing Mount Everest 1 ½ times along the way.
Davis is the only woman in the solo field of the 2014 Race Across the West and, at age 54, if she makes it within the time limit she’ll be the oldest woman ever to conquer the gruelling event.

On Tuesday, Davis and 11 other competitors will leave the California coast north of San Diego, ride through the desert canyons of Arizona and Utah, and finish in the Rocky Mountains of Colorado.

At first glance, Davis, who spent most of her adult life hobbled by a severe form of arthritis, seems an unlikely athlete.

But competitors in ultra-endurance events tend to be older to begin with, in part because more mature athletes know how to suffer — and there’s a lot of suffering in these events.

And, when it comes to soldiering on through pain, arthritis is one of the best teachers.

In Davis’s first competitive race, the 800-km Texas Time Trial in 2012, monsoon-style rain came down when some cyclists still had another 20 hours on the road.

“It was completely demoralizing,” she recalled. “One young woman had a headache and was vomiting by the side of the road and I was trying to convince her to stay in the race, but she couldn’t see her way clear that this misery was going to pass.

“As we get older, we accumulate more experiences that are unpleasant . . . and 24 hours doesn’t seem so long.”

Of the six women who started that race, Davis and another rider in her 50s were the only two to finish it.

She was 19 when she started having joint pain. The diagnosis was psoriatic arthritis: her body’s immune system was literally attacking her joints.

What followed was decades of pain and extreme fatigue. Her feet, hands, elbows, shoulders and neck are all severely damaged. When she turns her head, her whole upper body comes with it because of fused vertebrae.

It wasn’t until a new type of drug was approved 12 years ago that Davis, a CBC news editor, got a physically active life back.

“I went into full remission and within five weeks I had energy spilling out of every pore and no pain.”

The joint damage couldn’t be undone so she focused on the two joints that still worked well — her hips and knees – and, at 42, started riding a bike around the city. She joined a charity event and then a cycling club.

“I would go ride with them for an hour and I’d get dropped in the middle of nowhere by myself,” she said. “But that didn’t bother me. I would just continue riding. If they were doing a 75-km ride, I’d do 150. I found I didn’t get tired and I enjoyed getting lost in the ride.”

Her mantra for a race is generally a simple one: “Always stay on the bike, keep moving, don’t stop, whatever you do.”

But in the Race Across the West it’s not that simple.

Davis will have a Formula One-style pit stop, ruled by a five-minute timer, every three or four hours. But to have any hope of avoiding hallucinations and having the physical and mental reserves to finish the race, she’ll have to factor in a few hours of sleep at regular intervals, too.

This is where her coach and crew chief Peter Oyler’s expertise will come in — if she’ll listen.

“We haven’t totally agreed on that schedule,” said Davis, laughing.

Davis wants to ride the first 36 hours without stopping to sleep so she can get through the dreaded part of the desert during the night, when it’s cooler. Oyler believes 18 to 20 hours is the longest she should ride without a sleep break.

Vaune wrote about her journey in UltraRaceNews; it speaks to the determination that true performance improvement practitioners must exhibit if they are to truly walk the talk on change:

I’ve been on the ultra-cycling circuit for a year and a half. I’ve qualified for the Race Across America (RAAM) and racked up a good list of 50+ age group titles, including the 2013 Ultra Marathon Cycling Association (UMCA) World Cup and Ultra Cup age group championships.

The skeleton in my closet: psoriatic arthritis, a disease I’ve fought since age 19. In my 20’s and 30′s it eroded all the cartilage in my shoulders, fused cervical vertebrae, fingers and toes, and put me into orthopedic surgery four times. Sometimes I couldn’t walk more than two blocks much less ride a bike.

In my mid-40′s a new biologic drug changed everything. It put the arthritis into a complete remission. I started bike commuting because it was easier than pounding my damaged feet on the Toronto sidewalks. Oddly, that led to ultra racing. Or perhaps not odd at all – arthritis gave me an insanely high tolerance for pain.

Fast forward to November, 2013. On an adrenaline high after completing the Trona 353, I registered for this year’s Race Across the West solo. A week after pressing ‘send’ on the registration form, I started waking up at night with stabbing knee pain. Within days I was struggling to walk and climb stairs.

The MRI and blood test results were a shocker: my arthritis had not only figured out how to outwit the $22K-a-year miracle drug, but it was chewing up my knees. I had severe cartilage loss in both, inflammation in my hips and elbows, and a double-knee replacement instead of a double-century in my future.

First thought: the party is over. Mourn your mid-life passion for ultra-cycling, hurl curses at the unfairness of life and move on. Those of you who love this sport will be able to imagine the bucket of tears I shed.

Fortunately, ultra-racing has taught me one thing: the most important muscle is the brain. I formed a general plan, then tried not to think of the task and uncertainties ahead, knowing it would destroy my morale. In a nutshell, it went like this:

2. Confront your fears. I was afraid I’d never be able to race my bike again, or, if I persisted, I’d destroy my knees. A surgeon comforted me with the fact that my knees are so wrecked I can’t make them much worse. In fact he recommended I continue cycling, because it is low impact and helps keep the supporting muscles strong and joints lubricated. Five-hundred mile races? Possibly destructive, he admitted, but impossible to say. He agreed with my end-stage logic: If a double-knee replacement is already a near certainty, I might as well enjoy doing my crazy sport as long as I can.

3. Embrace the worst-case scenario. In my case that would be surgery and about a half-year of rehab instead of Race Across the West. But most people are able to cycle well on fake knees. Maybe not ultra-race, but I’ll get over that if I must. I’m lucky there’s a solution and that in Canada I don’t have to worry about the medical bills.

4. Think about the here and now. My coach and I decided that the best approach was to treat the problem like an ultra race and divide it into discrete segments. Banish the big picture, with its dire scenarios. I set aside all plans for Sebring and the Race Across the West (RAW), and focused only on weekly training goals. Every week that I could complete the required physiotherapy and Computrainer intervals was a victory I relished as if I’d just finished a RAAM-qualifier.

The result? I registered for Sebring four days before the race. I made it to the start and to the finish. I paced the race well, and put up with the hip and elbow arthritic pain that dogged me for the last twelve hours like an invisible tandem partner who refused to pedal. I stayed in the saddle and cycled lightly at a high cadence, zoning out to a 90-rpm playlist on my iPod, to avoid stressing my knees. The downside to that strategy: saddle sores. The upside: I crushed my previous 24-hour personal best (333 miles), with 353 miles and the 55-59 age group title.

I still don’t know if I’ll be able to do Race Across the West. My knees held up reasonably well on Sebring’s flat terrain. The next step is to test them on some long Western climbs. I need to find an arthritis medication to replace the one that stopped working. So I’ll continue with Plan A for now, and have fun with my mini-goals.

This is an unconventional race report. And ultimately there may be no fairy tale ending. I share it merely to show that the lessons we learn from ultra-cycling can help us cope with even more epic challenges in our real lives. 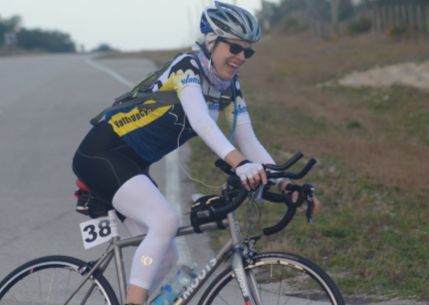