← Poll of the Day: Like it or Not, Maternity Leave Hurts Your Career
A Methodology to Quantify the Value of Brands → 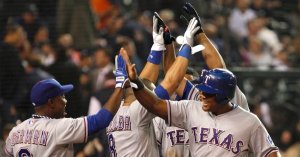 The best evidence that the Moneyball era isn't over is the Texas Rangers.

As Jonathan Mahler points out in a recent article, “If you’re interested in learning how agile, innovative thinking can triumph over deep pockets, go out and see “Moneyball” — or just stay home and watch baseball’s 2011 playoffs.”

From a business point-of-view, what is striking about this piece is that it points out that in addition to whatever insights the analytical approach of the Oakland A’s Billy Beane might have brought to the game of baseball, that there is also the question of whether a baseball club has the right ownership with the mindset to invest for the long-term. There is also dogged determination, risky but shrewd moves and a dash of luck for good measure. These are attributes that can make the difference between creating a winning business or one that is a perennial under-achiever.

Each of the four current baseball play-off teams tells a story of some good decisions, some luck, and a willingness to think about the long-term. The story of why the Oakland A’s has not succeeded despite Billy Beane’s insights, also tells an instructive story of greed and ineptitude that is a cautionary tale about how not to run a business.

Of the four teams that are still alive — the Detroit Tigers, the Texas Rangers, the St. Louis Cardinals and the Milwaukee Brewers — only the Tigers boast one of baseball’s 10 largest payrolls, and even they barely make the cut, at No. 10.

This has made for a thrilling postseason. Fox may have groaned at the unexpected departure of the Yankees and the Philadelphia Phillies (not to mention the Red Sox’ September collapse), but a lot of baseball fans didn’t. Thanks partly to the cultural phenomenon of “Moneyball,” which demonstrated that teams didn’t need a big payroll to win, we’re all small-market fans now, no longer rooting for the hapless underdog — sorry, Mets and Cubs — but for the team that is doing more with less.

It’s a subtle but significant distinction and it has unmistakable political overtones, especially during this time of rising class resentment. You didn’t have to spend the day dancing around the drum circle in Zuccotti Park to see Game 5 of the Yankees-Tigers division series in New York — with its constant cutaways to those slick-suited men hunched over their BlackBerrys in the Legends Suites — as more than just a baseball game. (It may be time to update the old cliché that rooting for the Yankees is like rooting for U.S. Steel. Today, it’s more like rooting for Goldman Sachs.)

Conspicuously absent from the postseason is the team run by the hero of “Moneyball,” Billy Beane. The Oakland Athletics finished the 2011 season 14 games under .500, making it the fifth consecutive year the team has failed to make the playoffs.

To hear Beane tell it, baseball’s Moneyball era is over. In a profile in The New York Times Magazine last month, he basically blamed the A’s recent history of mediocrity (or worse) on the fact that the rest of the league had stolen his playbook. The various competitive advantages that he was once able to exploit — valuing, say, on-base percentage over batting average — no longer exist.

Baseball is moving “back to an efficient market,” said Beane, sounding every bit like the in-demand corporate speaker that he has become. He went so far as to suggest that the game was starting to resemble European professional soccer, which is dominated by a handful of big-spending “superfranchises.”

The problem with this narrative is that it isn’t true. Baseball is more competitive than ever, and we have this year’s postseason to prove it.

Behind each of the surviving teams is a story of shrewd management that flies directly in the face of Beane’s self-serving assessment of the state of the game, starting with the Cardinals, who have essentially turned into the perennial contender that Beane’s A’s were supposed to be. This year they made the playoffs against all odds, after losing their ace, Adam Wainwright, in spring training and then falling 10 ½ games behind the Atlanta Braves in the wild-card race with just over a month to play.

A lot has been made of the Cardinals’ pluck and resilience. But what has kept them on the field into mid-October isn’t character or, for that matter, a carefully crafted long-term plan. It was a few risky yet ultimately vindicated moves, like asking an aging Lance Berkman, who hadn’t been an everyday outfielder since 2004, to man right field.

Above all, it was an almost irrational unwillingness to give up on what looked like a lost season, which yielded a flurry of quick fixes (and quick fixes of those quick fixes) as well as a trade-deadline Hail Mary — the swapping of a budding star, Colby Rasmus, for some badly needed pitching depth — that seemed crazy until they worked.

The Brewers have baseball’s 17th-largest payroll and the sort of homegrown lineup — Ryan Braun, Prince Fielder, Rickie Weeks — that is not supposed to exist in the game’s modern era.

But they wouldn’t be playing for their first World Series berth since Ronald Reagan was president if their general manager, Bob Melvin, hadn’t traded away several other products of the club’s killer farm system for a pair of starting pitchers, Zack Greinke and Shaun Marcum. He was widely second-guessed at the time, but it’s hard to do so now.

Then there are the Tigers, run by Dave Dombrowski, the architect of the 1997 Florida Marlins, the youngest expansion team to win a World Series. After a disappointing 2010, Dombrowski made what was probably the best free-agent signing of the off-season (Victor Martinez), then plugged the remaining leaks, adding a starting pitcher (Doug Fister) and a third baseman (Wilson Betemit) in late July.

With Justin Verlander, a former first-round draft pick who hasn’t always looked as if he would live up to his enormous potential, that has been more than enough.

But the best evidence that Beane is wrong, that money isn’t all that matters, is the Texas Rangers. Remember Tom Hicks, the financial whiz who signed Alex Rodriguez to a 10-year contract worth at least $50 million more than the next-highest bidder, then surrounded him with free-agent sluggers at the end of steroid-inflated careers?

Hicks failed to buy a World Series, but he nearly went broke trying. Guess what happened when he started belatedly slashing expenses in a vain attempt to prevent the team from going under? Jon Daniels, who was 28 when he became the Rangers’ general manager, had the chance to take a different, more cost-effective approach . He restocked the team’s depleted farm system, refocused on pitching and made a few big trades that created the nucleus of the team that is now on the brink of its second straight World Series appearance.

Baseball, “Moneyball” teaches us, is an inherently unfair game. It’s undeniably true that big-market teams are at an advantage. They have the resources to reload every winter and take a fresh shot at the pennant, while clubs like the Brewers have to play a different game, biding their time and seizing their win-now moment before they can no longer afford to keep players they’ve spent years cultivating.

But there’s a reason general managers like Theo Epstein are now courted as aggressively as the players themselves: Building a baseball club is an enormously complicated business. Unlike G.M.’s in the N.B.A. and N.F.L., you’re not plucking pro-ready players. You’re identifying and developing raw prospects, and mixing and matching them via trades and free agency, all the while knowing that every player you let go is a potential star and every one you sign a possible bust. Being a big-market team is no guarantee of success, just as being a small-market one is no guarantee of failure.

Which brings us back to Beane’s A’s, who may actually have a more relevant lesson to teach us about baseball’s — and America’s — economy than that David can defeat Goliath.

In a fascinating essay posted last week on the Baseball Prospectus Web site, the writer Kevin Baker traces the 100-year downward trajectory of the A’s franchise. It’s the story of greedy, inept management making one bad decision after another to move the club to ever-smaller, poorer markets — the A’s, recall, went from Philadelphia to Kansas City before landing in Oakland — all the while soaking up de facto subsidies that they didn’t reinvest in the team.

The A’s are trying to relocate to San Jose, which is bigger and richer than Oakland. This would presumably improve their financial prospects. But baseball’s governing body is sitting on their request, apparently in deference to the more politically powerful San Francisco Giants, who don’t want to lose their monopoly on the Bay Area’s wealthiest ZIP codes.

Who suffers? The fans, of course, who are left to watch a second-rate team play uninspiring baseball in a decaying, outdated ballpark. If Beane is looking for a new baseball story to tell his corporate clients that illuminates the state of American capitalism, this could be a good place to start.