I find consumer perception and psychology both fascinating and critical to making money in many businesses. This article is from The New York Times, July 17th 2011. 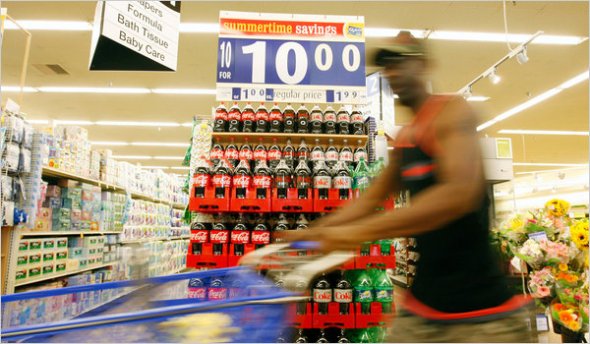 At an Albertsons supermarket in Los Angeles, a sign advertised a 10-for-$10 deal. The Albertsons chain is owned by Supervalu

Buy a lot — a whole lot more than you meant to — and save!

Want just one each of those items? Well, yes, you get the same discount in most cases. But grocers would prefer that you think bigger. Like most retailers, they are feeling the pinch as people spend less these days. So they are playing a multiples game to entice shoppers to buy more than their shopping lists dictate.

The old gimmick — buy one, get one free — has been expanded to include some pricing equations worthy of Isaac Newton, or at least of middle-school math class. Using buying patterns detected from loyalty cards, receipts and other research, grocery chains are searching for the multiples sweet spot: The current Pathmark circular advertises Bush’s baked beans at three for $5 and Yoplait yogurt at 10 for $6. At Cub Foods, Sprite 12-packs are on sale at three for $11.97. Kroger has lemonade, socks and Kroger gummi bears candy on sale at 10 for $10.

“We look at the customer buying behavior, and that’s how we land on multiples — to get customers a little higher than their typical purchase rate,” said Tom O’Boyle, executive vice president for merchandising and marketing at the Great Atlantic and Pacific Tea Company, which owns grocery stores including Pathmark, A.&P. and Food Emporium.

Even though shoppers usually do not have to buy the suggested amount to get the discount, they do anyway, said John T. Gourville, a professor of marketing at Harvard Business School who studies pricing strategies.

It is all about the power of suggestion, he said.

“Many people buy the amount, or buy in increments, that are advertised — five for $5, they end up buying five boxes of couscous or whatever it happens to be,” he said.

When Supervalu, the parent of Cub Foods and other grocery chains, tested 10-for-$10 deals versus five for $5 on the same items and in the same markets, it found that people usually bought two more items when the promotion was 10 for $10, said Tom Lofland, Supervalu’s director for sales and promotions.

When it tried doing one for $1, Mr. Lofland said, there was a double-digit decline in sales. “When they see a 10 for $10, they’ll see that as a value, and they’ll stretch,” he said.

Grocery stores have always offered deals, of course. But grocery chain executives say that in this economy, with people visiting stores less frequently, spending less per trip and sticking to their shopping lists more closely, the competition to offer compelling deals is stronger than ever.

Most grocery shoppers make a list before going to the store, according to two recent studies, and that is behavior that has not eased up since the recession. In one recent survey, Acosta Sales and Marketing, which advises clients like Nestlé on pricing, found that 84 percent of shoppers make a list, 23 percent make fewer grocery trips than a year ago, and that, over all, shoppers are spending less per trip than a year ago.

Suppliers are also getting in the game, offering grocery chains deals on some items, like soft drinks, so that shoppers will buy more — and therefore less of the competing brands. With a case of Coke at home, for example, shoppers might be less tempted to pick up a Pepsi at the drugstore.

“The manufacturers are keen on this,” said Mr. O’Boyle of A.& P.. “Coke would say, ‘We’ll give you a better deal if you can get a five-times multiple out there for the customer.’ ”

In another twist on the buy-more strategy, some stores have been selling build-a-meal deals, said Robert E. Hill Jr., president and chief executive of Acosta, the price and marketing consulting firm. A store will arrange chicken breasts, a bagged salad, a soda and dessert together, and slap on a price like $10.

“It’s encouraging shoppers to buy the full store,” Mr. Hill said, rather than cherry-picking from various specials. “It’s really important for the retailer to grab that shopper to make the purchase while they’re in the store, because they may not be back that week.”

Lori Loomis, 38, always makes a list before going shopping near her home in Boerne, Tex., first by planning meals for the week, then by checking on the weekly discounts. A good offer could sway her to put something extra in her cart, she said.

“If something is a good price and it’s not on my list, I’ll go ahead and stock up on it, especially if I have a coupon or it’s on clearance,” she said.

Still, when Ms. Loomis began seeing the rash of 10-for-$10 deals, she quickly sorted out the rules.

And in pushing the envelope as far as possible, grocers sometimes come up with multiples that are just too far-fetched for ordinary shoppers.

“There have been things in the past we’ve tried, like buy 20 yogurts for $10,” Mr. O’Boyle said. “Unless you’re someone who eats two or three yogurts a day, you’re going to start to back up on that.”